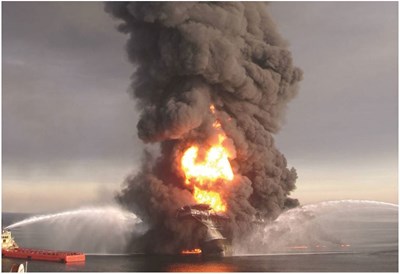 To commemorate the 30th anniversary of Oil Spill Response Limited, we are publishing a series of articles covering our milestones. In this article, Paul Schuler, OSRL’s Director for Regional External Affairs, shares about his experience overseeing the Macondo spill response in 2010. At that time, Paul was the CEO of Clean Carribean and Americas (CCA). CCA merged with OSRL in 2013.

An explosion occurred at the Macondo exploration well in the Gulf of Mexico on April 2010, and 11 people died as a result of the accident, while 17 others were critically injured. The rig sank 36 hours after the initial explosions. The well was capped in July, and estimates for the spill size range from three to five million barrels of oil.

“We saw on the news that the Deepwater Horizon rig had exploded in the Gulf of Mexico. CCA immediately went into “Internal Standby”, and we notified our BP emergency response contacts that we were ready for deployment. We had an ADDS-pack/Hercules training flight off the coast of Miami-Fort Lauderdale in December 2009, and when we were mobilised by BP’s dispersant coordinator, we did everything we had done five months earlier in training.

Skip Przelomski, our now retired Fort Lauderdale base manager, was the first to deploy with the ADDS. On the first day, we flew for 11 hours. We began a crew rotation that lasted for over 80 days. Our Technical Advisor Erik DeMicco (now with ExxonMobil), and our fire fighter responders were included in the response, and Mike Gass (who just retired in 2014) went to the Command Center in Houma, Louisiana, to manage Dispersant Air Operations. Mike is a former US Navy pilot and was well-versed in dispersants. This unique blend of skills made him the perfect person for this job… for the next 80 over days.

It became very obvious early on that we would be deployed for “the long haul,” and with high tempo flight operations, the health and safety of our people was my paramount concern. I asked Mike to coordinate (direct) raising spray altitude from 50 to 75 feet, after determining that the deposition pattern was virtually the same.

We deployed our marine science travel trailer for an office, and had a “Risks” banner prominently posted and safety briefings daily. After over 80 sorties, and approximately 360,000 gallons of dispersant sprayed, we only had one minor safety incident. Our safety record is what I am most proud of.

The ADDS had no GPS (Global Positioning System), so we developed a GPS-human interface “on the fly” to provide Incident Command with flight and spray tracks. This required two additional people in the airplane. Our people kept the airplane manned, and the ADDS fully operational. We never missed a flight due to our system. To meet operational requirements, our fire fighter responders juggled their shifts and time-off. When OSRL arrived, we pooled crew resources and worked as a single team.

We were a great team and we are all are very proud of the huge effort and impact that CCA put forth with a very small group of very dedicated professionals."

Did you know? OSRL deployed 70 staff and put in more than 3500 man-days for the Macondo spill. Find out more about our involvement in this report.