The weather on week seven of our Offshore week proved to be less severe than the previous. This ensured that we could deploy all day, every day and thus, have time to practice using all of the equipment that we loaded on Monday.

On Tuesday, we deployed the Current Buster 2 system in a two-vessel operation. After towing in a U-formation, we passed the towing line back to the main vessel. Half of the team boarded the support vessel and travelled to the back of the Current Buster 2 where they used a disc skimmer to simulate the recovery element to this active boom.

On Wednesday, we split into two teams. Half of us redeployed the Current Buster 2 system, while the other half used the OWI’s to build the boat spray system and boom vane. We then re-grouped as the advantages of using the boom vane for a one vessel operation were clearly demonstrated. After lunch, the teams swapped over. As one team reeled in the Current Buster, the other practised building the boat spray system and boom vane on deck.

On Thursday, we did not split into teams as the NeatSweep® system required everyone to muck in due to its size and the available deck space on the Williams Vessel. After fitting all the metal elements together at the back of the system, the NeatSweep® deployed similarly to the Current Buster, that is, with a boom vane. Friday was spent rehabbing all the equipment used, debriefing, and compiling the various evidence required for our ACMS. 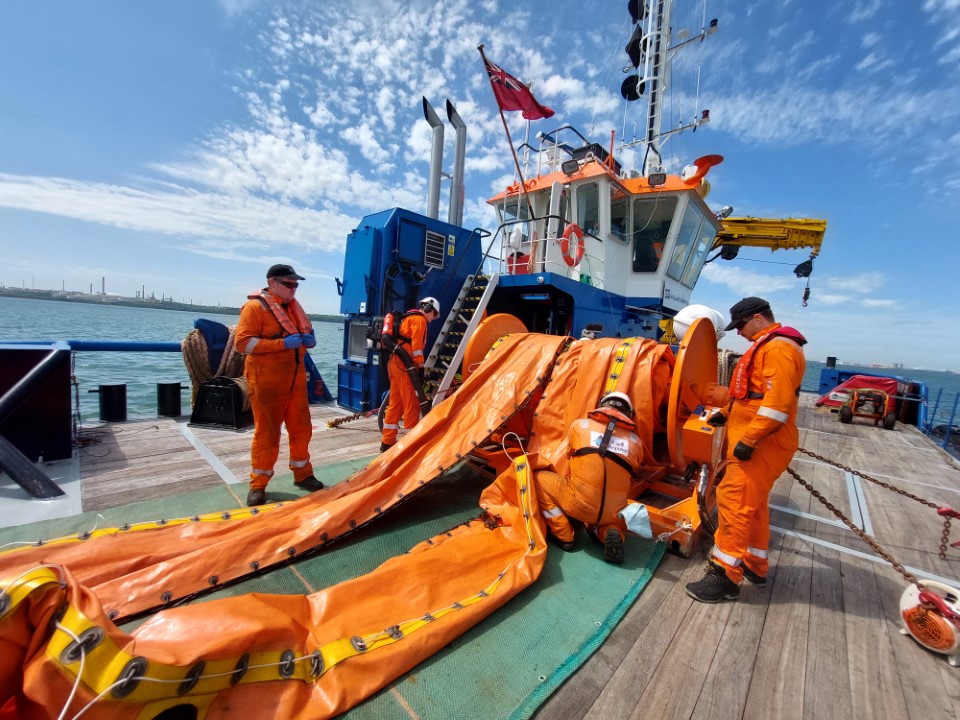 On Monday, we had our morning meeting, followed by a course recap of the previous week. ACMS capture and formative assessments were completed, and we were given a presentation focus for the week, running mooring. The trainers gave a detailed explanation on the process and importance of this and we felt very well prepared for the following day.

We arrived early to ensure that we had the equipment ready for the day and after an operational and safety briefing, we set sail for the water and deployed Current Buster 2. We returned to the docks, transferred the equipment from the vessel to the trailer, and proceeded to prepare our booms for running mooring. In little to an hour, the running mooring was achieved, voila!

On Wednesday, we were given a presentation in readiness for the trip to Cedre. The brief was very thorough, which consisted of journey management plans and risk assessments. The team then proceeded to rehab the equipment that was used for the week. The day was then closed out by the trainers, with formative assessments.

After an amazing week spent working with real oil in Cedre, France, it was time to get back to Southampton to implement some of the newly gained strategies and skills to make sure they are as perfect as possible.

At the start of this week, we were presented with a scenario of a spilled oil case currently occurring on Stokes Bay beach in Gosport. The whole idea was that an unknown quantity of an unknown product was reported to show the same characteristics and appearance of a light fuel oil/diesel and has been reported by a crew change vessel in the Eastern Solent. Trajectory modelling indicated we had to conduct a shoreline response at the predicted affected area, so our job was to plan and implement a strategy to tackle this problem.

We produced and reviewed risk assessments alongside other necessary documents, we then selected all required equipment and safely loaded them on a trailer. The next day, we drove to Stokes Bay beach early in the morning. Upon arrival, we reviewed the risk assessments again and conducted a site and safety briefing before splitting into three teams to conduct SCAT surveys.

At Bournemouth Airport we were introduced to the stunning Boeing 727 and discovered how it is a challenge to build a dispersant system of this magnitude that is compatible with flammable fluids, and that can perform spray operations at speeds of around 150kt. and altitudes of 150ft.

The next morning, we started our day by preparing a Site Entry Protocol along with a Site Response Plan before moving forward with unloading equipment and setting up the site with a command tent. In the afternoon, we deployed a long spur boom with the help of our captain. Later that day, we mobilized recovery and storage equipment to carry out stage pumping.

At the end of the day, we debriefed and then planned the overnight boom watch, allocated three time slots, four hours each, from 1800 to 0600. The following morning, with the help of captain Lee Prendergast and James Thompson, we converted our formation to achieve Horseshoe Booming and simulated how we would transfer oil from the apex of the boom to multiple fast tanks using Stage Pumping. Finally, on Friday, we drove back to base and started with equipment rehabilitation. The team worked hard on restoring the pallets to an ideal condition. 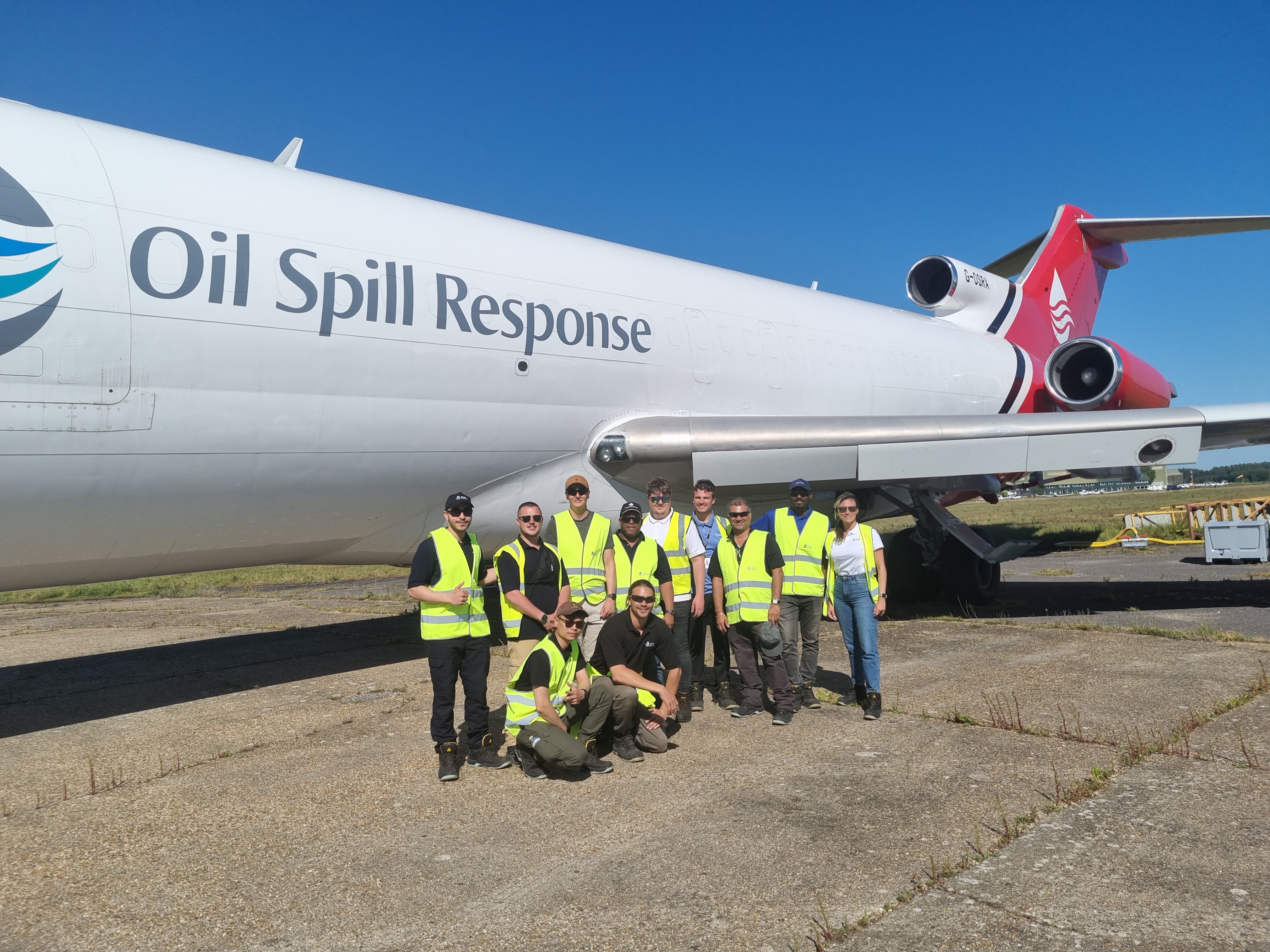 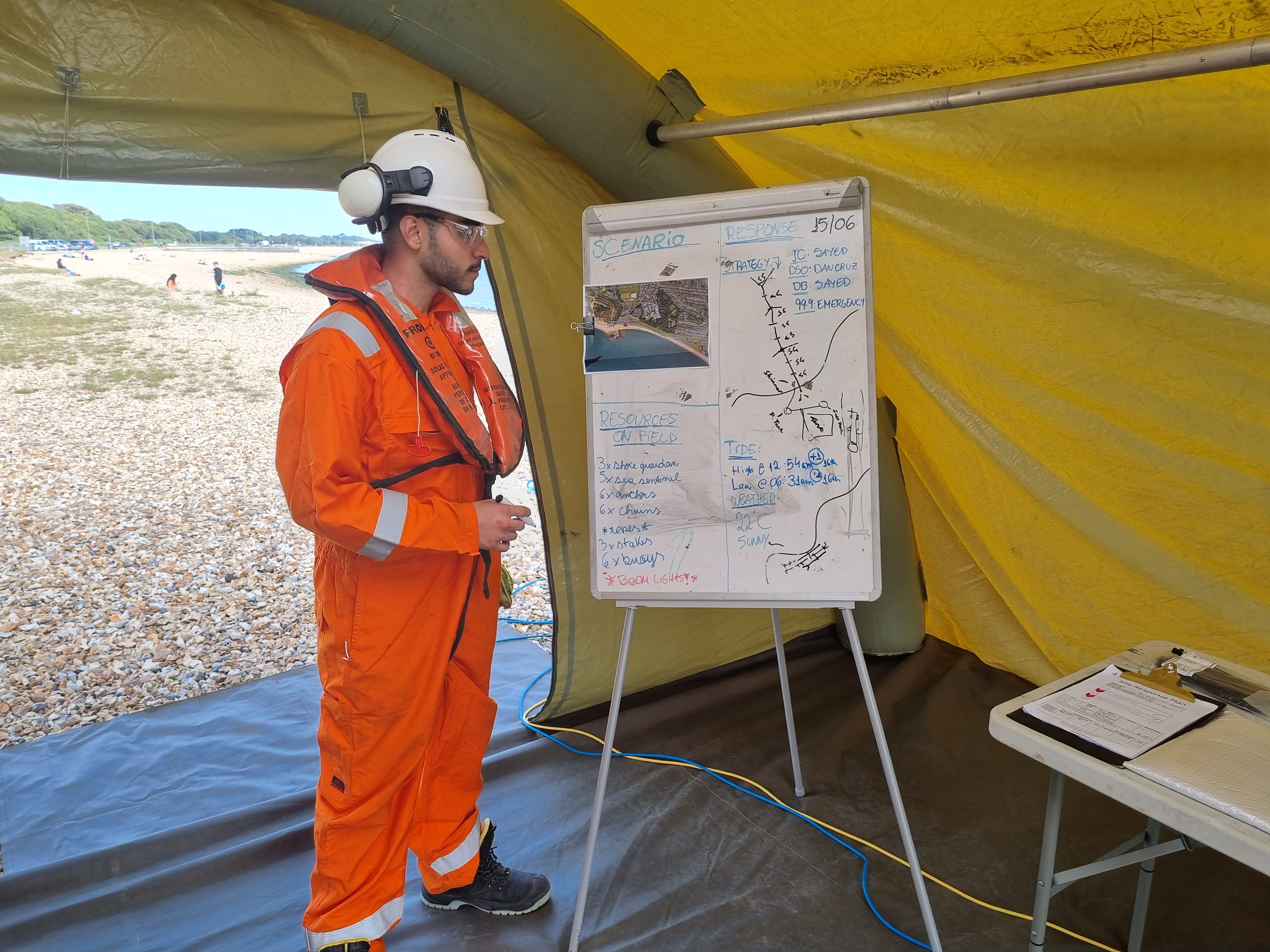 The offliners completed their Endex as the final challenge of the 13-week Responder Training course. The scenario dictated that was that there was fictional refined lubricant ‘Soul Glow’ spilled from a ship-on-ship collision in Southampton Water, south of Netley.

Planning commenced after the operation brief and roles. ICS documents were filled in, risk assessments produced, SIMA completed, and equipment was identified. An offshore recovery operation was the first response strategy where the Ro-Boom and a termite skimmer were selected.

On Monday, before conducting the offshore phase, the team had to present the response strategy and rationale to the client for scrutiny. Following the meeting with the client, we travelled to Southampton Docks where we loaded and boarded a Williams Shipping vessel to conduct a successful containment and recovery exercise.

Day four of Endex began by conducting SCAT surveys of Thorness Bay Beach to determine if the scenario oil had reached the shoreline. One team conducted a further SCAT at Newtown National Nature Reserve, identifying possible exercise oiled areas, as well as encountering a relaxed seal on a paddleboard. The other inject was to change the tyre on the Land Rover, while the remaining team members processed the SCAT tracks on RoboGEO and conducted the relevant ICS paperwork for the following operational period.

Thursday was the final operational day, and the shoreline containment and recovery phase of the exercise leading on from the SCAT and SRP. The shoreline phase started with a SEP and finalisation of the SRP. The team deployed a straight lay shoreline boom for collection, which was then placed in a horseshoe formation to conduct a low-pressure flush with a Komara 7K. After the equipment was recovered and secured, the team went for a well earnt group meal – a fantastic end to an incredible training programme. 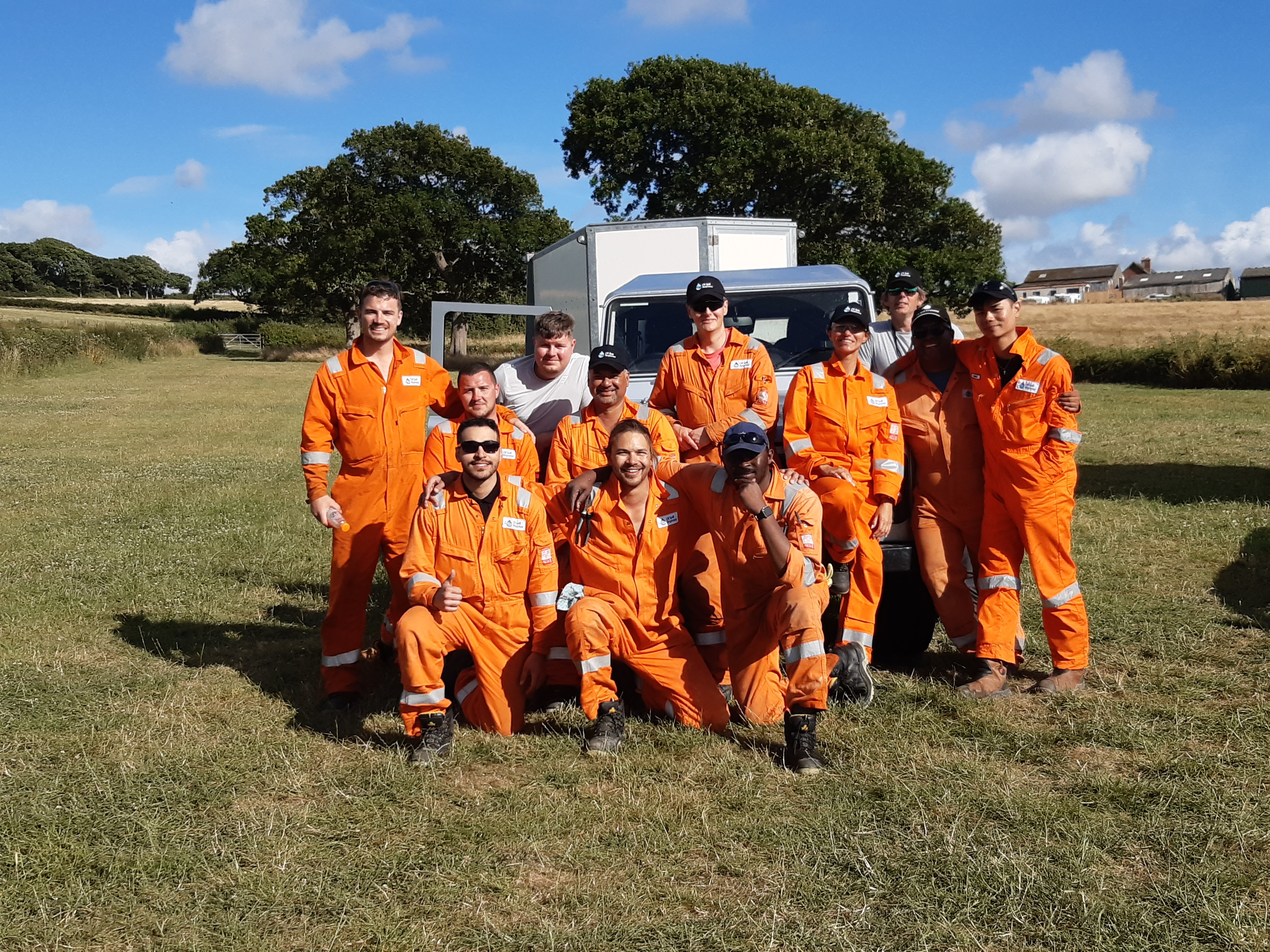 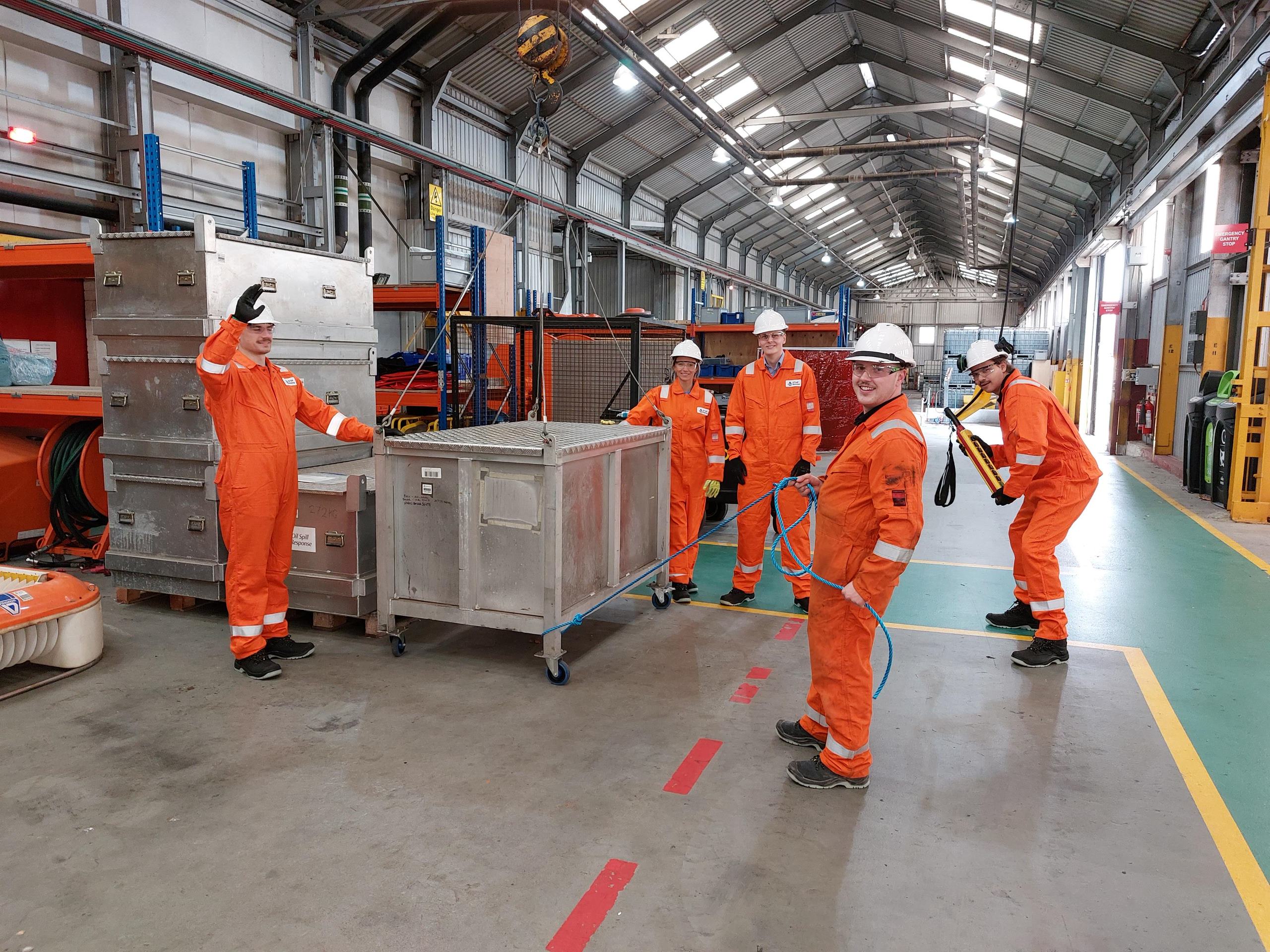 Finn joins OSRL from a forklift manufacturing company where he worked as an account coordinator. Before this, Finn completed a BA (Hons) in Modern Languages, specifically French, Spanish and Portuguese. He spent nine months abroad during his degree, studying in Brazil and Argentina. After completing the oil spill responder course, Finn now continues his career as an oil spill responder.

Clement is an experienced emergency responder with a demonstrated history of working in the Oil & Gas industry. He is a trained Response Coordinator and has previously worked at Shell as an Emergency Responder before joining OSRL in February.

Dan graduated from Bangor University last year, where he studied Marine Biology and Oceanography. He played American football at university, hiked in the Snowdonia National Park and trained to be a Marine Mammal Medic. After finishing University, Dan worked for Thames Water as the Biodiversity and Heritage advisor before joining the OSRL in March.

From a young age, his favourite subjects have always been mathematics, science and technology; therefore, he was motivated to complete B.Sc. in mechanical engineering at the University of Bahrain. His technical skills include working with Autodesk Inventor, AutoCAD, MATLAB and EES. Before graduating, he finished a two-month training program in the Ministry of Works. He then worked with the Bahrain Ship Building and Repair Company before joining OSRL in March 2022. Since joining OSRL, Sayed has completed the Spill Responder Course and participated in many internal projects and exercises.