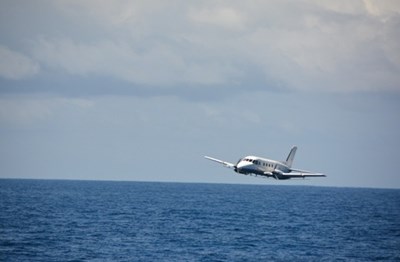 As part of Tullow Ghana Limited’s (TGL) continued commitment towards oil spill and emergency response preparedness, an annual exercise was conducted over a four day period from  6th – 9th November, 2015. The aim of the exercise was to test all functions of the TGL Incident Management System.

The exercise scenario was centred on an incident that occurred during drilling operations on board the Seadrill West Leo, located in TGL’s TEN field. The incident, as well as causing large scale damage to the rig, also resulted in an uncontrolled loss of oil due to multiple events including a direct failure of the rig’s Emergency Shutdown system

All offshore oil spill response planning and coordination was completed ahead of the exercise. Oil Spill Response Limited’s (OSRL) West and Central African (WACAF) aircraft was relocated to the Takoradi Air Force Base on the eve of the exercise and dispersant spray tank loaded with 1m3 of fresh water.

On the morning of Friday 6th November, ahead of the start of the exercise, a flight safety brief was conducted between Noordzee Helikopters Vlaanderen (NHV Rotary Wing), TGL Aviation Team and the WACAF air crew. The safety brief covered all operational schedules such as flight altitude, flight times, exercise location and safe aircraft separation.

To be able to test response in case of an incident, all equipments were deployed in real time. On receiving instruction from the TGL Incident Management Team (IMT) in Accra, the WACAF aircraft transited from Takoradi Air Force Base at 5000ft to the TEN Field before descending to 500ft at 130 knots to pre-determined coordinates approximately two miles NNE of the West Leo drilling rig.

The location of the release had been identified using data received from oil spill response tracking buoys that had been deployed by TGL EHS Security and Oil Spill Response vessels located in the field.  Once on location, the WACAF aircraft conducted several aerial surveillance sorties in a parallel track search pattern originating from the rig location and moving along the current / wind corridor in a NNE direction. The  aircraft  then dropped to the required height of 50ft and commenced the first of four spray runs along the same corridor indentified to the West of the Field.  After each spray run the WACAF aircraft would climb to 500ft and fly in a box pattern before descending back to 50ft for the next spray run. Once  the 4th spray was completed, the WACAF aircraft the returned to Takoradi Air Force base for debrief.

The offshore exercise was considered extremely successful. The WACAF aircrew performed all tasks in a highly professional manner achieving all exercise objectives safely without issue and therefore clearly demonstrating the capabilities and effectiveness of the WACAF Tier 2 Service.

An effective response depends on competent personnel working to a well developed plan that has been adequately resourced and regularly exercised. Our Preparedness Services will ensure your staff are trained, your plans are properly developed and you have access to the right equipment.