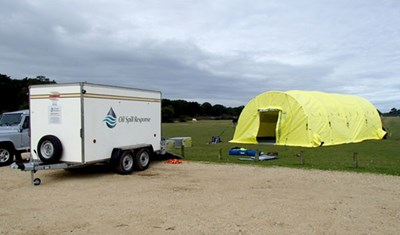 A command centre package is usually stored in a 20-foot container, but OSRL has recently installed the package in a fully contained, highly transportable trailer (with dimensions of 4.78 (L) x 2.1 (W) x 2.05 (H) metres and a gross weight of 1800 kilograms) to enable faster deployment during a spill incident.

During a response, a command centre is used to establish vital satellite communications in remote locations, and includes ship-to-shore marine VHF radios, power generation and shelter for the on-site Command Team.

On September 4, OSRL field tested the command package by deploying the trailer in New Forest National Park, near Southampton, in order to ensure the smooth operation of the command centre.

The Command Trailer was despatched to a member location in West Africa in October 2015. OSRL is currently researching further enhancements for follow-on units, which can be tailored to suit the requirements of individual members.