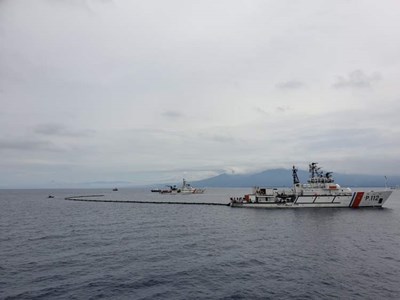 Earlier this month, a team from OSRL’s Singapore base was invited to attend MARPOLEX 2019, a biannual marine pollution exercise that brings together relevant agencies from the Philippines, Indonesia, and Japan.

Taking place 1 - 4 July, the event, which was first held in 1986, is designed to combat potential pollution threats to the marine environment – particularly those caused by oil spills – by enhancing the preparedness and response capabilities of each participant nation.

OSRL was invited to observe the exercise by the Global Initiative for South East Asia (GISEA), a collaboration between IPIECA and IMO that exists to support Southeast Asian governments in working effectively with the oil industry to reduce the risk of oil pollution.

The exercise scenario imagined a collision between a passenger vessel and a tanker in the Davao Gulf, where one million litres of oil was assumed to have been spilt, a fire had broken out on one of the vessels, and a number of passengers had jumped overboard.

Following a table-top planning session, which ran through the planned activities and assigned roles and responsibilities to those taking part, the exercise began by simulating an operation to rescue those in the water. This was followed by firefighters extinguishing the fictional fire, before the deployment of boom from two vessels and dispersant spraying from a third vessel to manage the oil spill. The exercise was completed in three hours and, in total, involved around 750 people and 16 vessels. Coastguards from China, Vietnam, Bangladesh and Sri Lanka, as well as representatives from the US Embassy in Manila, also observed the event.

After the exercise was completed, OSRL and GISEA team members shared their reflections on the activities they had observed and provided suggestions on how response capabilities could be developed in the future. OSRL Responder, Ali Heydar, was also asked to give a presentation on Shoreline Clean-up Assessment Techniques (SCAT), highlighting to attendees the best-practice treatment recommendations OSRL has developed, including the documentation it uses around the world. The presentation concluded with OSRL Response Personnel Manager, Lee Nai Ming, speaking on the topic of liability and compensation schemes.

“This is precisely the type of event that OSRL can play an active role in attending. It was fantastic to see the collaboration between the nations involved, and MARPOLEX is an incredibly important exercise to build an effective partnership to combat pollution within the marine environment. Going forward, I hope OSRL has the opportunity to join in on similar exercises throughout the region to build a strong relationship with the relevant parties and provide valuable feedback to enhance future oil spill response operations,” commented OSRL Responder, Tawirat Bates.