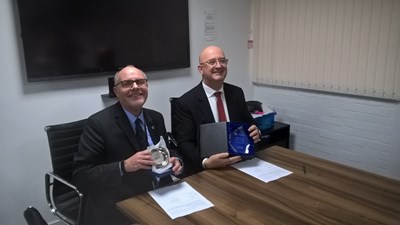 Oil Spill Response Limited (OSRL) and France’s Centre for Documentation, Research and Experimentation on Accidental Water Pollution (CEDRE) have signed a ‘Letter of Cooperation’ to strengthen operational-level collaboration, as well as increasing personnel and knowledge sharing across a broad range of areas related to spill preparedness and response.

The announcement represents a formalisation and reaffirmation of both organisation’s commitment to maintaining high levels of operational cooperation – a relationship that has existed for many years. The agreement has been described as primarily operational in nature and will focus on advancing technology, training and good practice approaches when dealing with oil spills.

“The signing of this agreement is an important step towards an increased level of cooperation between our organisations,” said Limb. “It is a significant development for OSRL’s members and will facilitate advances in our understanding and approach to dealing with a spill by combining our collective experience, research and technical capabilities in this area”, Limb continued.

“The signing of this letter of cooperation is an important landmark for CEDRE as it is the first building block in the bridge both organisations will strive to develop and consolidate,” Doll added.

The Letter of Cooperation outlines the ways in which the two organisations will work together and details the specific areas contained in the agreement, including:

•         Documentation and sharing of technical expertise

•         Analysis of equipment and research and development

Oil Spill Response Limited (OSRL) is the largest international industry-funded cooperative. It exists to respond to oil spills wherever in the world they may occur, providing preparedness, response and intervention services. OSRL is wholly owned by most of the environmentally responsible oil and gas companies around the globe, and its membership represents the majority of the world’s oil production. It currently employs 300 people across nine locations around the world.

CEDRE are regarded as international experts in accidental water pollution, the organisation has five main activities: response support, contingency planning, training, analysis and testing and research. It is also a recognized resource centre.