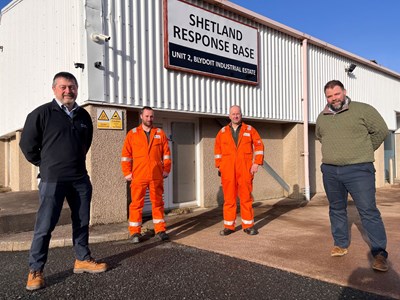 Oil Spill Response Limited (OSRL) has taken over the management of a response base on the west coast of Shetland.

The facility, based at Scalloway, houses equipment that can be rapidly deployed in the event of an incident, either offshore or nearshore.

Response equipment can be transported to the ports of Scalloway or Lerwick for deployment onto suitable vessels. Shoreline equipment is stored in trailers ready to deploy at short notice to any areas that could potentially be impacted.

The base supports several west of Shetland operators and was established by bp. OSRL and bp completed a thorough handover to ensure continuity of service under OSRL’s operatorship.

Robert Limb, OSRL Chief Executive, said: “We are pleased to announce the introduction of an OSRL base in Shetland.

“While we never want to face a situation requiring deployment, this important service provides an extra layer of protection when responding to incidents. Its favourable location on the west coast of Shetland allows us to act quickly and efficiently.

“The base will be run on a daily basis by our trained contractors on Shetland and managed remotely from the OSRL Aberdeen office. Training courses will also be offered at the base for our contractors and other interested stakeholders on the island.”

exists to respond to oil spills wherever in the world they may occur, providing preparedness,

response, and intervention services. OSRL is wholly owned by most of the environmentally

responsible oil and gas companies around the globe, and its membership represents the

majority of the world’s oil production. It currently employs 275 people across twelve locations