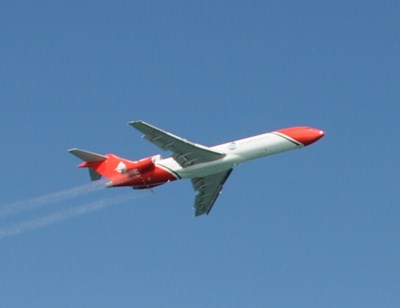 Oil Spill Response Limited (OSRL), the world’s largest oil spill response cooperative, will be showcasing the capabilities of its Boeing 727 aerial dispersant aircraft on the Solent on 7th June 2017. Flying off the coast of Lee-on-the-Solent, the low-level on-the-water exercise is scheduled to take place at approximately 19.30 and will demonstrate the aircraft’s unique dispersant capabilities, spraying fresh water to simulate the application of dispersant in a real incident.

The Boeing 727 will be joined in the skies by another OSRL asset, a Piper Navajo PA-31 surveillance aircraft. The Navajo is used to assess the extent of any oil spill and provide guidance to the larger aircraft so that is can deliver the most effective response. The Navajo can be rapidly mobilised and is equipped with a full range of sensors optimised to capture and transmit up-to-date information of an oil spill to the command centre enabling all the response assets to be coordinated in the most effective way.

The Boeing 727 being used in the exercise is one of two identical aircraft operated by 2Excel Aviation Ltd, on behalf of OSRL, which employs a ground-breaking dispersant delivery system. Both planes are permanently based in the UK and represent the only fully certified jet-based dispersant aircraft in operation anywhere in the world. One jet is on standby at all times, ready to be in the air within just four hours of a mobilisation request. Each B727 houses seven 2200 litre tanks and a powerful pumping system, capable ofÂ delivering up to 1200 litres of dispersant a minute, making them fast and highly effective tools when dealing with an on-the-surface oil spill.

OSRL’s Chief Executive, Robert Limb, said: “When any of our 150 members calls our emergency operations centre, they need to know that the latest and most effective solution is on hand and immediately available. What’s more, we are duty bound to minimise the environmental impact of any oil-based incident, using the most suitable available tools. Our investment in the two Boeing 727s, and the TERSUS Dispersant Delivery System, is validation of our commitment to meeting those responsibilities, and exceeding the needs of our members, both in terms of geographical scope and technological span.

"During similar exercises in the past we received requests for additional information. With that in mind, we wanted to inform everyone about the event and provide the opportunity to see some of the assets we have in our arsenal for combating an oil spill. As this is an exercise, only clean water will be released so no dispersant fluids or oil are involved, whatsoever.”

Oil Spill Response Limited (OSRL) is the largest international industry-funded cooperative. It exists to respond to oil spills wherever in the world they may occur, providing preparedness, response and intervention services. OSRL is wholly owned by most of the environmentally responsible oil and gas companies around the globe, and its membership represents the majority of the world’s oil production. It currently employs 300 people across nine locations around the world.