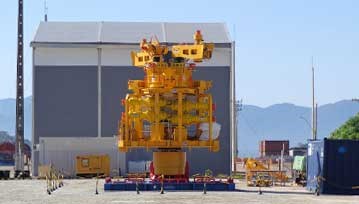 Oil Spill Response Limited (OSRL), the global oil spill response co-operative funded by some 160 oil and energy companies, announces the opening of a new base in Angra dos Reis, Brazil, marking a major advancement for regional and global response operations.

The base houses one of OSRL’s four cutting-edge well capping stack systems designed to shut-in an uncontrolled subsea well. With capping systems also stored at strategic locations in Norway, Singapore and South Africa, the delivery of the Brazil stack signifies the full availability of OSRL’s international well capping capability, providing for swift response in the event of a subsea well incident around the world.

Oil and gas companies across the industry can access the equipment through OSRL’s Subsea Well Intervention Services (SWIS). SWIS provides subscribers access to four response-ready Capping Stack Systems and two Subsea Incident Response Toolkits for debris clearance, blow out preventer intervention and the subsea application of dispersant at a wellhead. The equipment can be used for the majority of known subsea wells in water depths up to 3000m. A global containment solution to supplement the well intervention system is also in development and will be ready for use by the end of 2014.

SWIS is the culmination of unprecedented industry collaboration. In 2011, nine international oil and gas companies formed the Subsea Well Response Project (SWRP), pooling resources to develop equipment that could enhance subsea well control capability. OSRL collaborated with SWRP to make this equipment available for the benefit of wider industry, and companies can now subscribe to SWIS to incorporate this essential subsea well contingency into their own incident response plans.

Robert Limb, Chief Executive of Oil Spill Response Limited, said: “SWIS represents OSRL’s ongoing commitment to provide world class responses to an evolving industry. Our expanding portfolio of subsea services helps our members prepare for, and handle, potential subsea well control incidents on a global scale. Members benefit from international capping capability, supported by OSRL’s industry-leading response and preparedness expertise. Our new facility at Angra dos Reis has strategic significance, allowing us to deliver an enhanced service in a region which contains some of the world’s largest hydrocarbon reserves. With four Capping Stack Systems, strategically located around the world, OSRL continues to deliver on its mission to enable the most efficient, safe and effective response to oil spills wherever they may occur.”

Keith Lewis, Project Manager of the Subsea Well Response Project, commented: “The arrival of world-class capping equipment in Brazil is a significant development for subsea well intervention in the region. Following the opening of SWIS bases in Norway, Singapore and South Africa, the inauguration of the Angra base today is the culmination of our work to enhance subsea well intervention capabilities around the world. Through the SWRP and OSRL, many of the world’s leading oil and gas companies have shared their expertise and resources for the benefit of the international industry. Our efforts will continue as part of the industry’s ongoing commitment to improve safety.”

OSRL is the industry’s leading oil spill response cooperative, providing preparedness, response and intervention services worldwide. Membership represents the majority of global oil production, comprising some 160 environmentally responsible organisations from government, marine and energy-related sectors. Operating from strategic locations in Europe, Africa, the Middle East, Asia Pacific and the Americas, OSRL is the industry leader in this field, having acquired a distinguished track record by attending more than 400 oil spill incidents during the past three decades.

The Subsea Well Response Project (SWRP) was launched in May 2011 to enhance international capability to respond to a subsea well-control incident, and is a non-profit joint initiative between nine major oil and gas companies: BG Group, BP, Chevron, ConocoPhillips, ExxonMobil, Petrobras, Shell, Statoil and Total. The project team consists of technical experts and other senior managers from each company. SWRP is operated by an affiliate of Shell, on behalf of the members, with headquarters in Stavanger, Norway.