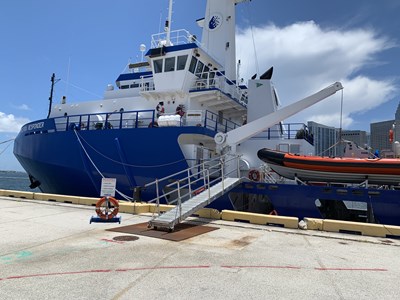 OSRL BUILDS ON COOPERATION WITH MSRC THROUGH JOINT EXERCISE

In addition to the immediate benefits of sharing expertise and response strategies, the event was intended to support the development of a closer relationship between two key Global Response Network members, to the advantage of the industry as a whole.

The MSRC is a U.S. Coast Guard Classified Oil Spill Removal Organisation (OSRO). Funded by the Marine Preservation Association (MPA), its primary operational area includes all Captain of the Port (COTP) zones on the U.S. East, West, and Gulf Coasts, including the U.S. Caribbean and the Hawaiian Islands – a total of 28 COTP areas.

Central to the exercise was the Florida Responder, a MSRC-owned oil spill response vessel, measuring 208 feet in length, and part of a fleet of 14 identical ships that MSRC maintains across the United States. It is equipped with four 1,000 bbl storage tanks to allow for on-board separation during recovery operations, as well as two integrated oil-water separators, berthing for 38 personnel, a helicopter deck, and a full communications room. The vessel is also equipped with four boom reels, a Transrec 350 skimmer, a 32-foot Munson boat, and multiple cranes for offshore containment and recovery operations.

For the exercise deployment, OSRL worked with MSRC's response supervisor, MSRC responders and primary contractor, Cliff Berry Inc. The response teams were joined onboard by an observer from the Bureau of Safety and Environmental Enforcement, and MSRC's Atlantic Region Response Manager, Tim Spoerl.

Once offshore, the exercise commenced by deploying the 32-foot Munson boat off the stern of the main response vessel. Operated by two skippers, the Munson directed operations during the deployment of 660 feet of 67-inch inflatable ocean boom, which was deployed from the stern and configured a ‘J’ formation. Once the boom was in position, a skimmer was launched into the collection point and towed – in line with the process performed during a real spill scenario. After documenting the activities and deeming the deployment a success, the group recovered the equipment back onto the vessel. Once completed, a debrief and key learnings were delivered, and the Florida Responder cruised back into the Port of Miami.

Matt Simmons, Operations Manager for OSRL, commented on the exercise: “The deployment was a great opportunity for OSRL responder, Michael Hernandez, and myself to work with members of MSRC’s Florida team on one of its well-equipped OSRVs, and to gain a better understanding of their offshore deployment approach. Equally, we were able to share aspects of our response methodology in a practical environment, furthering our collective understanding of best practice and building a strong sense of collaboration that will only help improve the effectiveness of both organisations.”