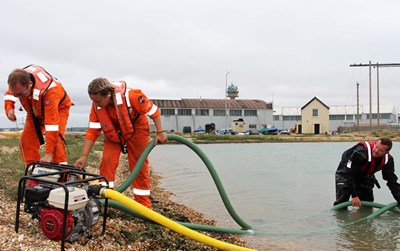 OSRL is currently performing a live exercise to further develop the capabilities of its shoreline operations and response teams. The simulated vessel collision and related oil spill is taking place on the waters between Hamble and Calshot, Hampshire, UK, and is being conducted in line with all relevant requirements and licence conditions.

Taking place over three days (11th– 13th September), the exercise’s primary aim is to test OSRL’s capability to rapidly establish a shoreline clean-up operation at a highly sensitive location, and to set-up a ‘forward operating base’, which will be used to manage the exercise on the ground. The exercise will also provide personnel from OSRL’s Southampton base with three days of critical shoreline clean-up operations training – helping to develop best-practice guidelines, which will be adopted by spill responders around the globe.

During the exercise, various items of containment and remediation equipment will be deployed in the water, and may be visible from the shore. Apparatus will include a range of different booms, which are used to contain oil in a real spill scenario, as well as ‘skimmers’, which are used to collect oil from the water’s surface.

Commenting on the exercise, Rob James, Regional Director EMEA said: “Shoreline spills, although thankfully rare, have the potential to cause significant damage to local wildlife and a region’s marine ecosystem. It is therefore vital that we continue to work with all relevant entities and authorities to test and validate our current methodologies for dealing with a shoreline spill incident. This exercise will not involve any oil being released.”

Oil Spill Response Limited (OSRL) is the largest international industry-funded spill-response cooperative, dedicated to responding to oil spills, wherever in the world they may occur. OSRL provides preparedness, response and intervention services, and is wholly owned by most of the environmentally responsible oil and gas companies around the globe. OSRL currently employs 275 people across 12 locations and is headquartered in Southampton, UK.