Apprenticeship with a Heart

OSRL is pleased that the apprenticeship scheme with Brockenhurst College in 2012 not only brought about a transfer of technical knowledge, skills and experience to these young mechanical engineers but also culminated in meaningful contribution to the society.

Back in 2012, three young and keen apprentices joined OSRL to start their careers in mechanical engineering.

To help facilitate their practical skills, they were assigned the task of restoring a nearly 50 year-old tractor back to its former glory. The tractor restoration project was an excellent training platform for the apprentices as it provided them a broad cross-section of all aspects of mechanical engineering that could be directly transferred to the equipment OSRL uses today.

The restored tractor drew much attention when it was exhibited at local country shows around Southampton before it was auctioned off at Brightwells - one of the country’s largest agricultural machinery auctions. Brightwells very kindly waived their auction commission so all proceeds of £4,170 could go to the following charities.

1. RNLI - a 24-hour lifeboat search and rescue service to help save lives at sea

A cheque for £1,390 was presented to Mr Archie Smith on 24 September 2015 at OSRL Southampton base. Mr Smith, the Honorary Secretary of the Chorleywood and Rickmansworth Fundraising Branch of the RNLI shared, “The RNLI is completely voluntary aided and solely supported by donations from the public; your donation will help save lives at sea. It takes over £400,000 a day to keep the 350 lifeboats and 290 stations running, as well as the ever increasing lifeguarding activities. Every volunteer lifeboat man needs training and then equipment which in itself cost over £2,000, so everything raised helps immensely. The RNLI is committed to not only saving lives at sea but more importantly preventing people from drowning. Initiatives both here and abroad are doing that.” 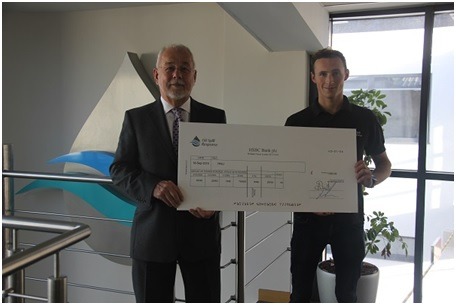 2. Jakes Mission - to provide equipment and therapy, to help a little boy with Cerebral Palsy and severe visual impairment to get the most out of life.

A cheque for £1,390 was presented to Jake’s mother, Ms Kate on 02 October 2015. Ms Kate said, “We were delighted that OSRL chose to help Jake's Mission. This fantastic amount of money will be added to the fund to buy Jake his own Eye Gaze unit. This will mean that Jake will one day be able to communicate with us and get his opinion and thoughts across.”

Jake is an amazing little boy who has a lot of challenges in his life. Despite living with Cerebral Palsy, severe visual and verbal impairments, he is determined to get the most out of life. The money will be going towards a special computer and program called Eye Gaze system, which is an eye-operated communication and control system that empowers people with disabilities to communicate and interact with the world. By looking at control keys or cells displayed on a screen, a user can generate speech either by typing a message or selecting pre-programmed phrases. Eye Gaze Edge systems enhance the quality of life of people with disabilities all over the world by aiding them to used to read, write and attend school. 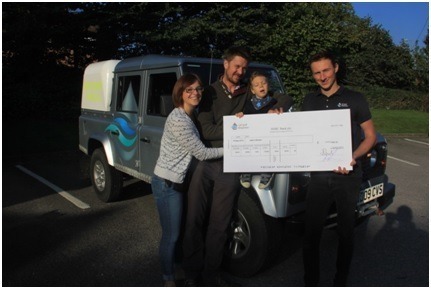 3. Solent Dolphin - a charity which operates a boat, for the sole purpose of taking people with disabilities out for free trips to sea on Southampton waters. 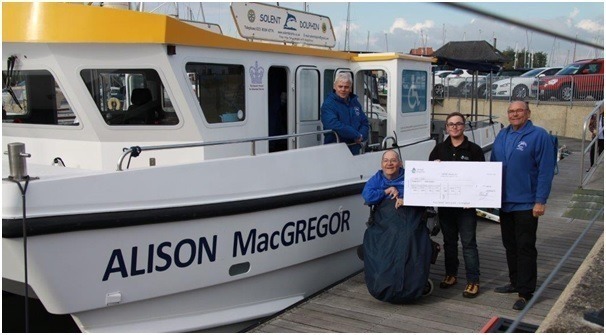 A cheque for £1,390 was presented to Solent Dolphin on 15 October 2015. Mr Peter Wales added, “Thank you, on behalf of the Board of Directors, for the kind donation to Solent Dolphin for the MV ALISON MacGREGOR. The MV ALISON MacGREGOR undertook 300 trips last year with 3,154 passengers. Bookings filled up quite nicely again this year following the announcement that we have just been granted the Queen's Award for Voluntary Service.”

The charity was originally set up with a donation from Jimmy and Muriel MacGregor, whose daughter, Alison, was killed in the Clapham Rail disaster on 12 December 1988. They responded to an appeal on the local radio for funds to build a boat for taking disabled people out to sea. Their generous contribution went to the purchase of two engines for the first boat. The boat was then named the MV ALISON MacGREGOR, and was launched in 1989 by Simon Weston OBE, who agreed to become the Patron of Solent Dolphin. The latest vessel was purchased from in August 2012 and caters for up to 12 people of all ages, including permanent wheel-chair users.