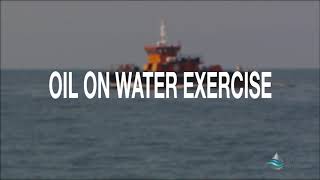 For four decades, Norway has hosted an annual Oil on Water (OOW) Exercise. Designed as an opportunity to verify and maintain the continuous development of Norway’s national spill preparedness plan, the exercise is conducted by NOFO and the Norwegian Clean Seas Association for Operating Companies as part of NOFO’s research and development objective.

Global Response Network (GRN) members, who have attended in the past, were joined this year by representatives from Australian Marine Oil Spill Centre Pty Ltd (AMOSC) and Clean Gulf Associates (CGA) with OSRL participating in the exercise as observers. In addition to learning from NOFO’s expertise, the exercise also presented an opportunity to share experiences.

The key objectives defined by NOFO for this year’s exercise comprised of the following:

Due to capacity restrictions aboard the vessels, OSRL were based between NOFO’s offices and their base in Tananger. As part of our engagement, Nick Dyer was permitted aboard the Norwegian multi-functional plane for an overflight. A Norwegian Coast Guard vessel was in-situ but there were no recovery systems deployed.

The flight mission was to determine whether any oil remained on the water’s surface following the exercise. The cloud base was relatively low (approx. 1,000 ft) so we circumnavigated the pre-defined exercise quadrant (20 km2) and conducted an initial search using Side Looking Airborne Radar data.

Having identified two slicks, we dropped beneath the cloud to get a visual. The slicks were quantified using the Bonn Agreement Oil Appearance Code and this was subsequently verified using Forward Looking Infra-Red (FLIR) system.

This practical exercise was extremely valuable in further developing the industry’s preparedness and response with structured multi-organisation research and development. The response was a huge success and done with minimal impact being placed on the environment in which it was conducted. We thank NOFO for the invite and look forward to future engagement with our industry partners.