With the complications of travel due to Covid-19 and the potential risk to response readiness, overseas training had been temporarily suspended. With the 727 crews completing sector training within the UK since February 2020. Overseas training flights (OTFs) are in place to enable a crew per month to achieve sector flights to and land at various locations within two sectors from Doncaster. The flights enable the crew to practise navigation skills, approach and land at less familiar airports. In Denmark, France, Ireland, and Jersey, airports are typically cycled through in a six-month rolling programme to support these competencies.

Naturally, our 727 is of interest to Boeing enthusiasts, aircraft spotters, OSRL members, and professionals in the aviation sector. They are always eager to glimpse the world's first jet based dispersant platform and potentially the last operating Boeing 727. The recent return to overseas training flights provided some local enthusiasts with an opportunity to view the aircraft with the 2Excel crew; Flying in Ireland has published an article from the visit, written by author Gabriel Desmond.

Read the article below or read the original article here.

With the return of OTFs, we will seek to provide opportunities for members to visit the aircraft on future visits.

On 4th May Cork had another welcome overnight visit by the Boeing B727-200 used for maritime oil spill response. This iconic type has long disappeared from frontline use as airliner and freighter so Paul Daly, Operations Manager, Weston Aviation, the handling agents, arranged a tour and briefing for a group of local aviation enthusiasts. 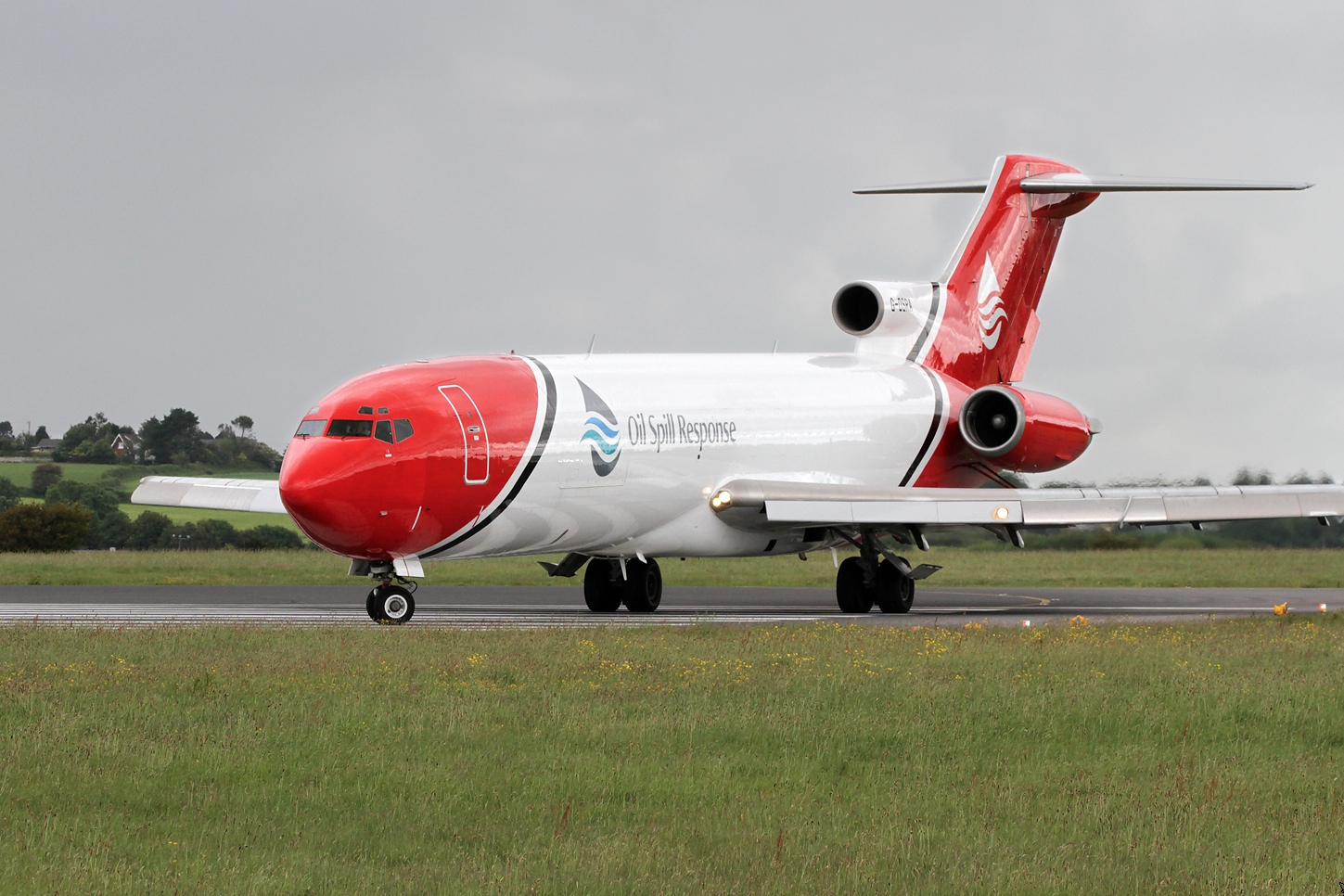 The main modifications for the oil spray role are the fitting of seven dispersant tanks along the main cabin floor and a 10-metre spray boom below the tail. Also seen, left, is the retractable tail skid. In the B727 tail scrapes were most likely during take off.

2Excel is a British aviation group that supplies specialist solutions to the government, defence, aviation and engineering sectors, including the oil and gas industry. They operate two modified Boeing 727-200s in the oil dispersant role which is able to deploy at short notice to emergencies worldwide from their base at Doncaster, near Sheffield, England. Their client for this is Oil Spill Response Limited, OSRL, a global cooperative from oil companies across the world.

The Modification to the 727s is called the TERSUS aerial dispersant system and consists of the installation of seven dispersant tanks holding 15,000 litres within the fuselage linked to a lateral 10 metre spray boom under the tail below the engines. This spray system has recently been strengthened to cater for possible ice accretion, resulting in the aircraft now being able to operate in all weather fight conditions. More remarkably, this system has been entirely developed, tested and installed by 2Excel’s own in-house facilities and staff.

The spray boom is fairly inconspicuous but is clearly seen here during the B727’s approach. The spray boom pumps out dispersant fluids through thirty nozzles.

OSRL and 2Excel regularly conduct training and emergency missions across Europe and even Africa to hone skills and maintain currency. They will fly a demonstration at this year’s RIAT at Fairford, England.

The dispersant liquids are classified as flammable and the TERSUS system is the only one in the world certified for aerial use. Compliance design required consideration of material compatibility, lightning protection, 9G crashworthiness, fault detection systems and the use of double-skinned fuselage storage tanks. The Boeing 727 trijet is an ideal platform for such a system as it is pressurised, well-powered, has a large freight capacity, proven reliability and has a three man crew of two pilots and a flight engineer which allows for safe stable flight at low level while simultaneously operating the dispersal system. This is flown at 150kts and a mere 150 ft above the sea. Spray application which takes 15 to 30 minutes depending on the rate of application is handled by the flight engineer.

The externally pristine OSRL aircraft could be mistaken for a new aircraft but its classic flight deck’s main panel layout was designed sixty years ago.

One aircraft can be airborne to an oil spill emergency at four hours’ notice. It can transit at altitude before descending to spray and then return at altitude to its Doncaster base. For longer missions, a transit stop may be made. It is available for worldwide deployment so for long ferry flights, the external spray boom can be removed and later refitted in a few hours to increase ferry range and altitude.

The Flight Engineer’s panels are behind the pilots, on the right. These are just some of the instruments he must monitor!

Boeing 727-200 G-OSRA was the last of 1832 examples off the production line in 1984. It was built as a freighter for FedEx and flew with them as N217FE for 28 years until eventually confined to desert storage. It was converted for oil spray response at Lasham, England in 2013 and is expected to remain flying until the present contract with OSRL expires in 2028. Boeing 727 spares are increasingly hard to acquire so it is expected that another narrowbody type will be converted for the TERSUS system.

So if you see this aircraft flying by, have a good look. It may be the last Boeing 727 you’ll ever see!

Special thanks to Paul Daly of Weston Aviation and Paul Doust, Fleet Captain and Head of Training B727 2Excel and crew. 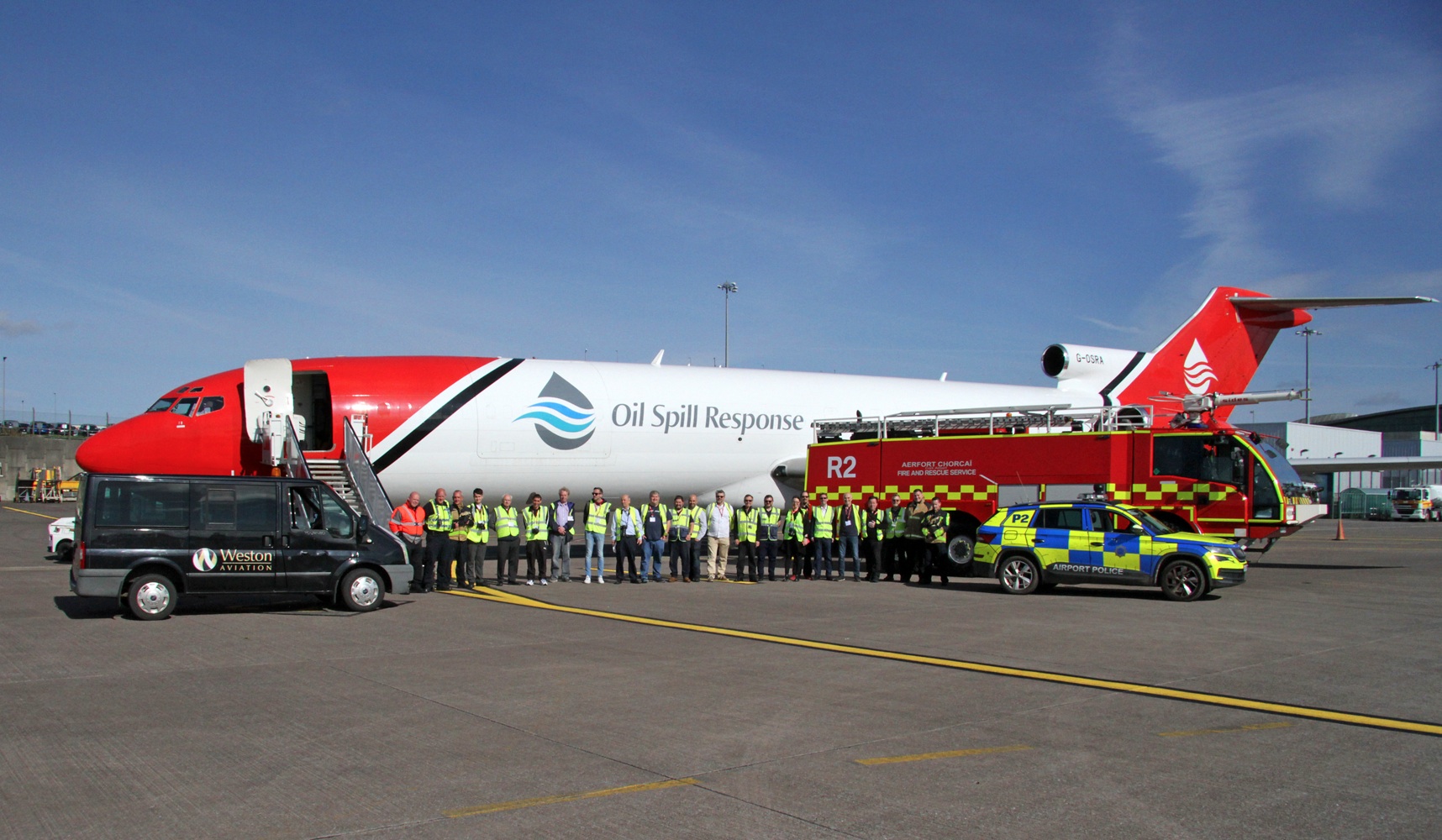 Learn how OSRL can help exercise your capability