Throwback 30: From conception to completion – the Subsea Well Response Project (Part 2 of 2) 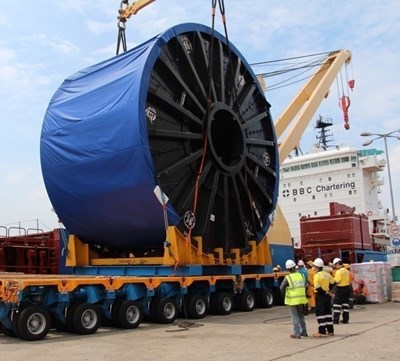 To commemorate the 30th anniversary of Oil Spill Response Limited, we are publishing a series of articles covering our milestones.

(Continued from part one: The establishment of Subsea Well Intervention Services)

OSRL established its own project team in the summer of 2013 to work closely with the SWRP team and to ensure the OSRL project management, mobilisation and logistics strategy was intelligently and effectively implemented. Ho Yew Weng was appointed OSRL Project Manager in July 2013. I was specifically recruited as the project Logistics Lead and started work on August 1, 2013. The project team was further enhanced with Charlotte Plunkett as Project Administrator, Miles Cole as Operations Specialist and Garry Dickinson as Subsea Engineer. In 2014 we had some staff turnover and new members with the addition of Kate Brown and Daniela Barreras-Biesot to compliment the operations and logistics team. Mirka Tepsa replaced Charlotte and Nick Olden replaced Miles.

The project was established as a concept to complement a subsea well incident response in scenarios where capping alone is not sufficient to stem the flow of well fluids and to capture and dispose of them in a safe and controlled way.

To be able to do this, the containment toolkit would be required to include standard, long lead time components and some bespoke items designed and engineered specifically to support the concept for both subsea and surface equipment. The containment toolkit was designed to be used with existing standard industry hardware that then can create an overall containment system. This can bring flowing hydrocarbons from a wellhead to the surface in a safe and controlled way, ready for storage or disposal, if well shut-in is not possible.

Once the system feasibility, concept and design were completed vendors were selected via a bidding process and supply contracts awarded as appropriate. An integral part of the concept was to have, where possible, Original Equipment Manufacturers (OEMS) also bid for the storage and maintenance contracts to allow for timely response to an incident contributing to operational capability for an incident owner. During the progress of the project some OEMs were not wholly comfortable with the storage and maintenance aspects so third party storages sites and maintenance contracts were awarded after a diligent vetting process. The aim being to ensure that operational logistics capability is delivered on time, in the right quantity and correct configurations, in a fully serviceable condition and, crucially, to the right location.

To complement further the equipment, a set of Subsea Well Containment Guidelines (SWCGs) was published by SWRP. This included a Master Guide and twenty three supporting documents, one of which is the OSRL Logistics Planning Guide for Containment authored by the OSRL Project Team. The concept of the SWCGs is to complement loss of well control incident response planning as part of a member’s preparedness.

There were, inevitably, challenges along the way. We worked very closely with our colleagues in SWRP to help ensure a satisfactory practicable resolution was achieved for all parties and stakeholders whenever a manufacturing technical or production issue arose. There were challenges with engineering quality from some OEMs not traditionally suppliers to the Oil and Gas industry, with a number of manufacturing milestones not being reached on time. There had to be a degree of acceptance of delays due to the bespoke nature of elements of the project equipment – the ‘unknown unknowns’. The Containment Toolkit was originally due for delivery in December in 2014. After mitigating the manufacturing challenges by close engagement with specific OEMs, the service date was delayed until April 2015. This was a sensible and pragmatic decision taken by SWRP with advice from OSRL.

The following equipment forms the OSRL part of the containment toolkit, designed and manufactured, stored and maintained as shown:

The containment system will help direct the flow of hydrocarbons from the capping stack via flexible jumper to a flow line end termination (FLET) manifold, flexible flow lines to a flow spool and WO sourced rigs will then run risers to bring the hydrocarbon flow to the surface. Mono Ethylene Glycol (MEG) can be delivered to the FLET and capping stack via the Chemical Distribution Assembly (CDA) for hydrate mitigation. MEG can be supplied from a vessel through a Coiled Tubing (CT) to a Coiled Tubing Termination Head (CTTH) and further distributed to the CDA.

After resolving some final minor technical issues, the project was finally completed in November 2015. The Post Project Review will be issued by OSRL Project Team by December 18, 2015 including lessons identified to aid future projects and contribute to corporate knowledge.

The containment toolkit is now stored in strategic locations to facilitate timely response around the world: three regional sets of non-air-freightable flexible subsea jumpers and subsea flowlines are stored in the UK, Brazil and Singapore for onward transportation. All other containment toolkit components are air-freightable and stored at the original equipment manufacturers in the UK, USA and Norway.

Overall we encountered several challenges along the way and by taking an intelligent and pragmatic approach we, as a team, achieved final delivery of significant capability for the industry.