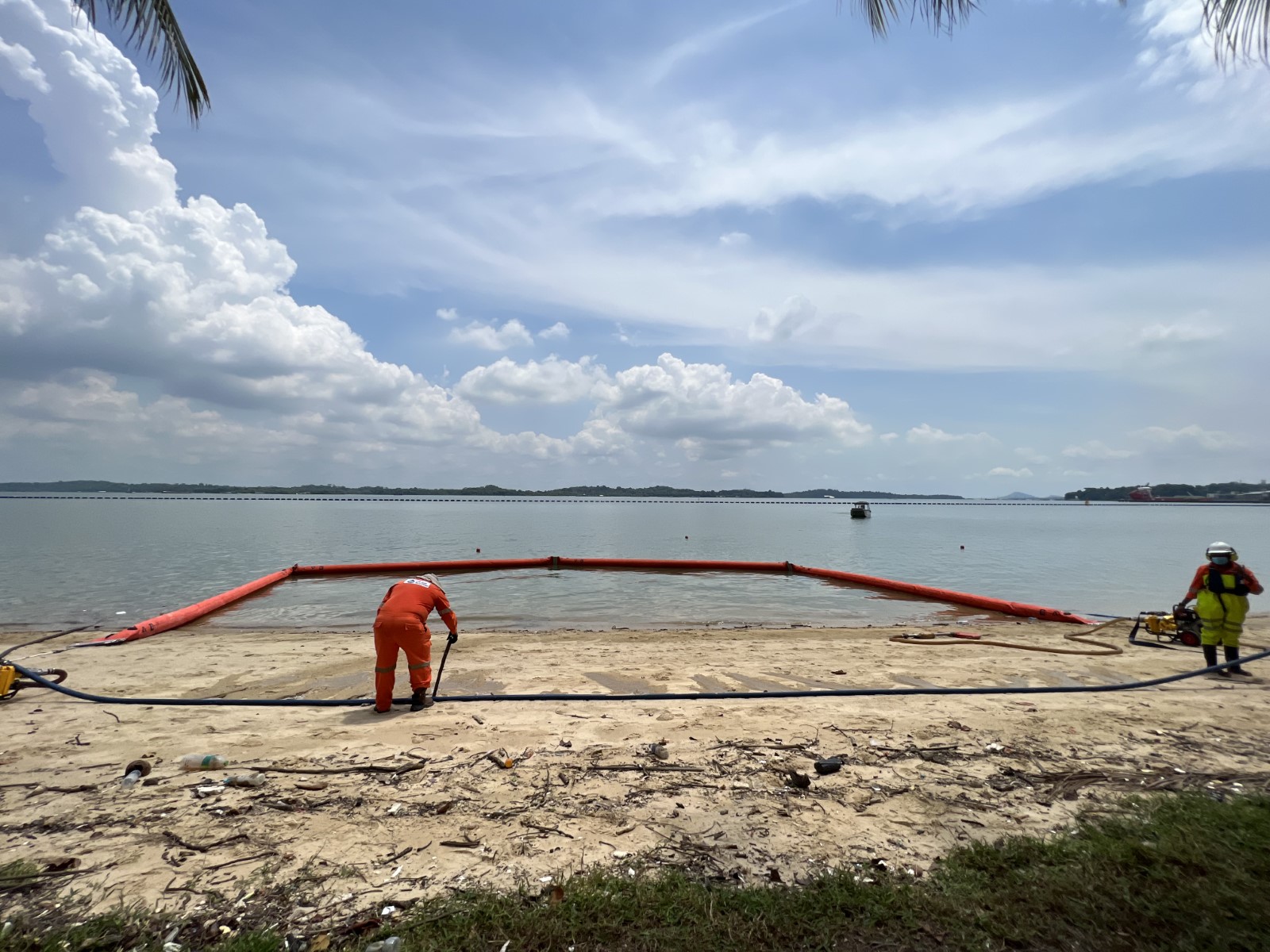 The Response department in APAC (Singapore) base recently kicked off our very first APAC Shoreline Exercise for 2022.

We set the objectives for this exercise to be:

We conducted and completed the exercise over the course of six days, broken down into the following events:

As with every OSRL exercise, we based this exercise on a realistic scenario base case. For inspiration, we decided to revisit the archives and play out a scenario from a spill dating back to 2017 - APL Denver involving a vessel collision between the APL Denver and Wan Hai 301 along the straits of Johor.

One of the areas that we were keen to explore as a potential site for SCAT was Coney Island Park, a 50-hectare ecologically sustainable park. This area, located northeast of the main island, is known to locals for its rustic charms but also houses a wide variety of habitats and a diverse range of fauna and flora, including several nationally threatened species. A recap on the 2017 spill shows that the spill probably impacted Coney Island back then, but it was not the focus of OSRL's response under the astute guidance of MPA.

The team conducted the exercise briefing a week before the actual exercise kick-off via MS Teams to confirm everyone's attendance, roles and responsibilities, deconflict activities, and present the scenarios and exercise plans to the participants.

The response team also began preparing the shoreline equipment by testing it out in the warehouse a week prior. It was also a good refresher for some of us to refamiliarise ourselves with the kit! 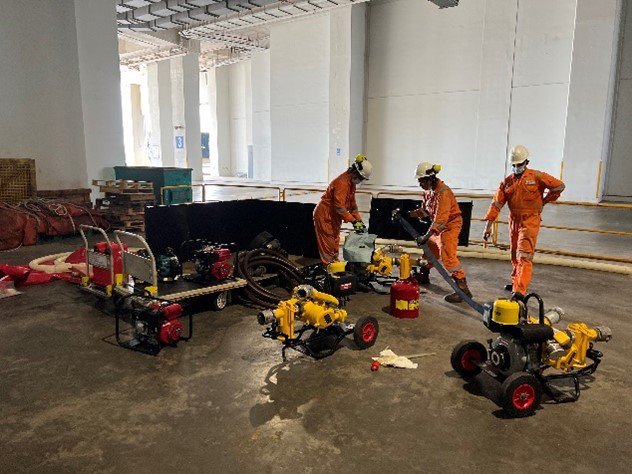 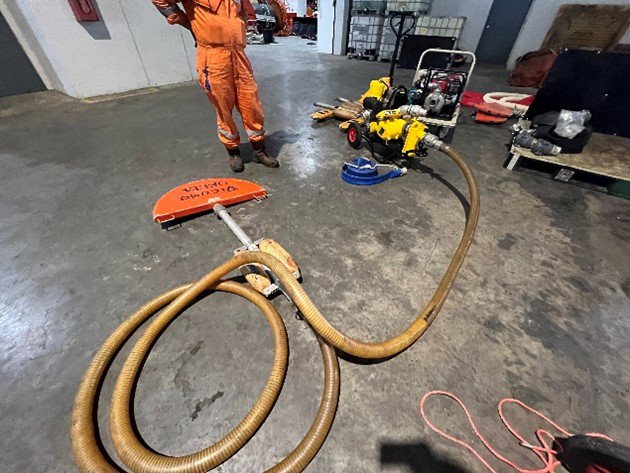 Photo 2: Testing connectivity of hoses with a skimmer

During the following week, two teams of three responders conducted SCAT on the 4th Apr (Monday) morning. The teams gathered at the eastern side of the Island entrance track, where the exercise planners were on-site to brief them on the exercise scenario. Following the safety and operational brief, both teams set out to conduct SCAT and completed their SCAT exercise on the western end of the island by mid-day. They then shared their findings through a presentation on 5th Apr (Tuesday). 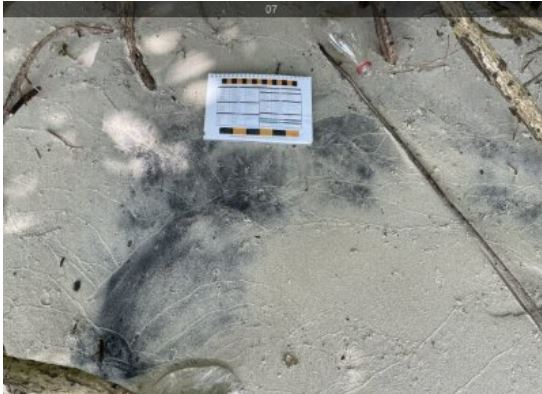 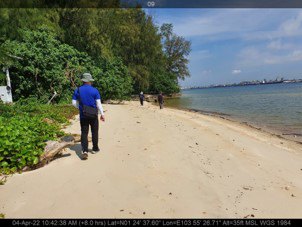 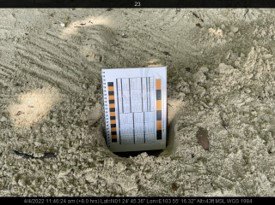 We conducted the shoreline response exercise on Wednesday morning at a different area of a familiar location, Pasir Ris Beach. We decided on this location based on the more straightforward approval process from the authorities due to the limited places where we could operate and seek approval following Singapore's COVID-19 restrictions.

The pre-identified Shoreline Response equipment package was loaded out from the base in the morning and transported to Pasir Ris Park. 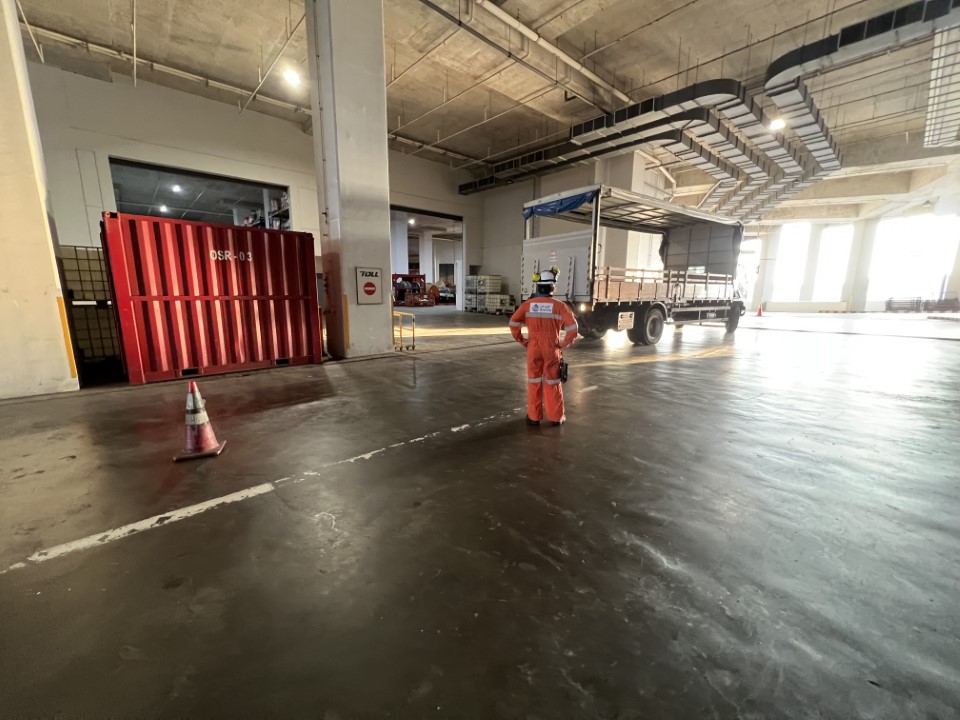 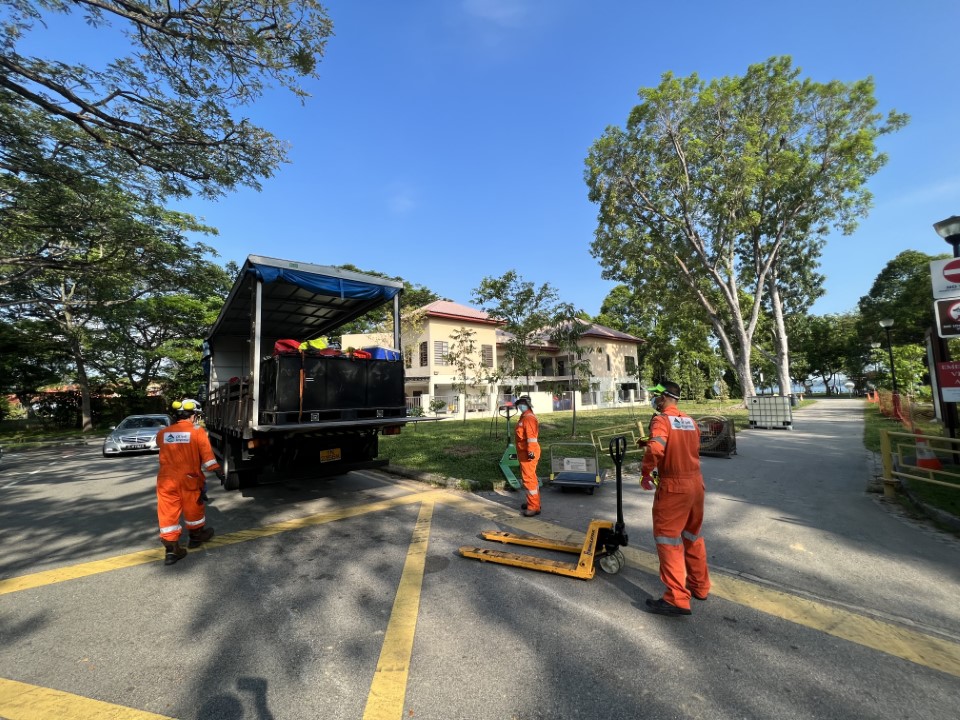 Photo 1: Loading of equipment onto tailgate lorry at base

Following the Safety and Operational brief on the exercise ICs, the teams set out to complete their tasking in their respective teams. Two separate teams, a Containment Team and a Recovery Team, were assigned to complete the shoreline deployment with the following taskings; 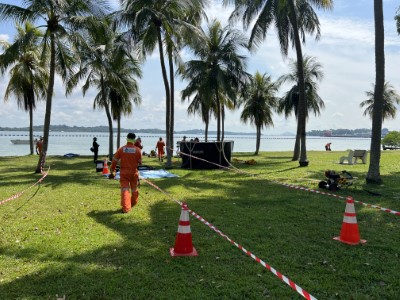 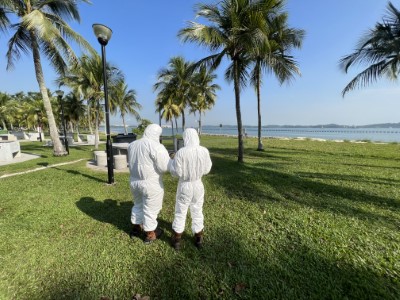 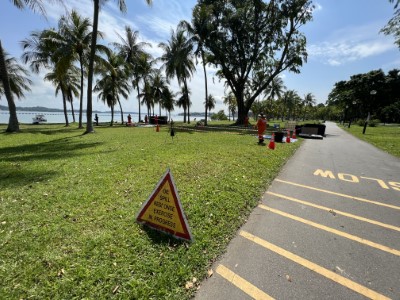 Photo 3: Zoning of exercise sites to keep off public

A vessel team was on standby to assist shoreside with the boom positioning and anchoring. The two teams had to work with group social distancing measures in place, as it was still a requirement from local authorities (there was a limit on outdoor groups to a maximum number of 5)! 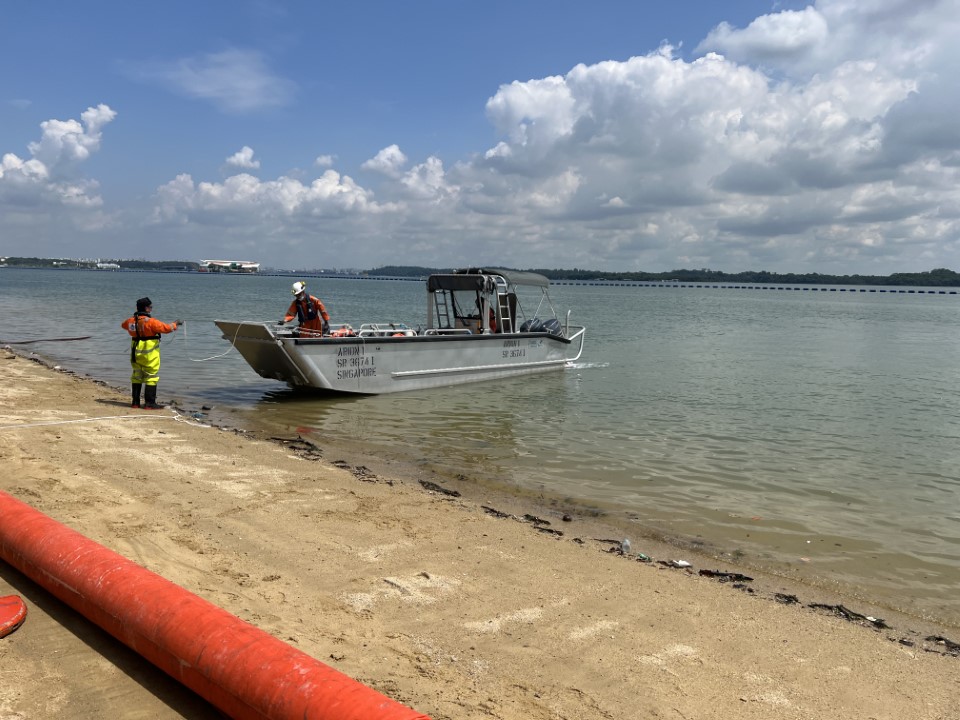 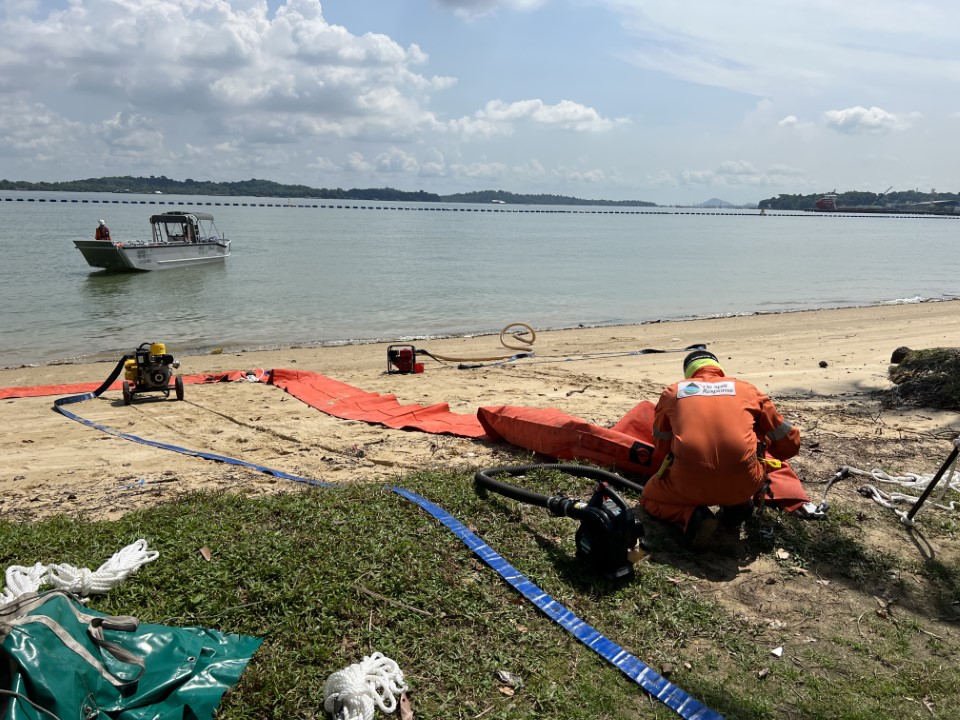 Photo 1: Preparing booms and passing the lines to the vessel team to get the booms into formation 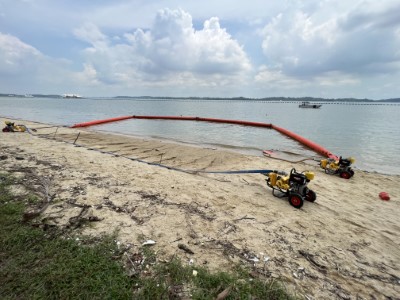 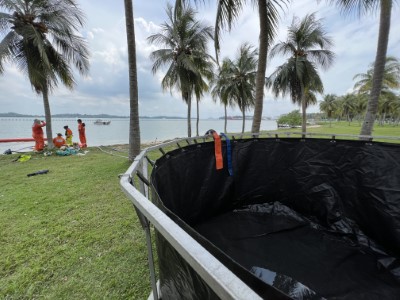 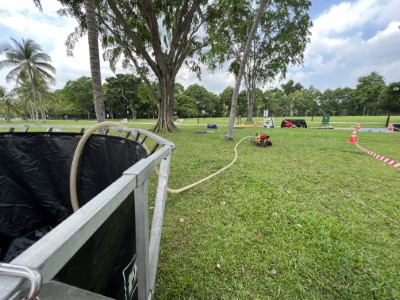 Photo 2: Recovery of "oil" from the shoreline to fastank using Delta Head Skimmer

The teams completed all the tasks assigned around 2 pm and had a brief hotwash to gather thoughts and reflect on the day's events. The exercise then ended, and everyone demobilised the equipment from the site and ended the day. We conducted rehab in the following days and a hotwash via Teams to close out ends. 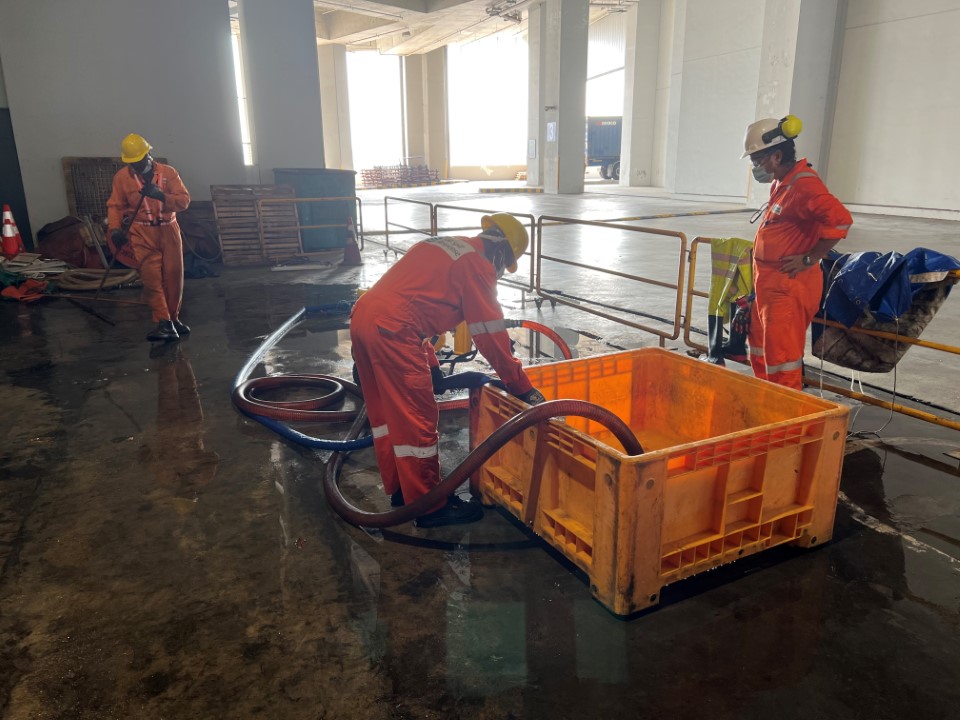 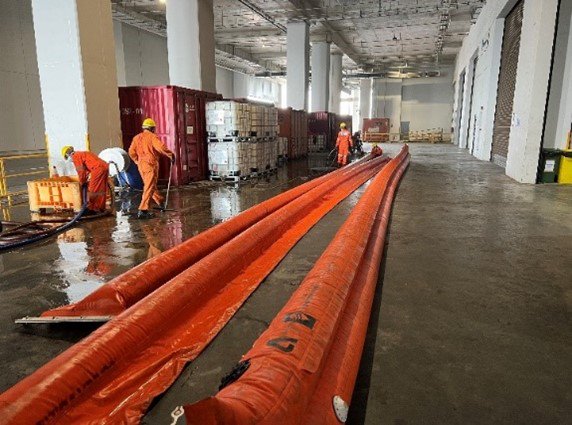 The exercise allowed responders to get some hands-on refresher moments with the shoreline equipment and work with each other after periods of reduced activity due to Covid-19. The smaller exercise teams allowed a greater focus on leadership, teamwork, collaboration and communication within and between teams (via VHF, of course)!

It was a hectic, eventful and successful week, as responders could train, exercise and drill themselves on SCAT and shoreline response again, further reassuring our ability to respond for our Members.

Some of the key lessons we have learnt from the exercise (in no particular order) include;

As Singapore has (finally) opened almost fully, we have learnt to embrace this new normal in this "endemic". We are looking forward to welcoming more of you to join us for our upcoming global exercises for the rest of the year!

Get in touch with your Regional Representative 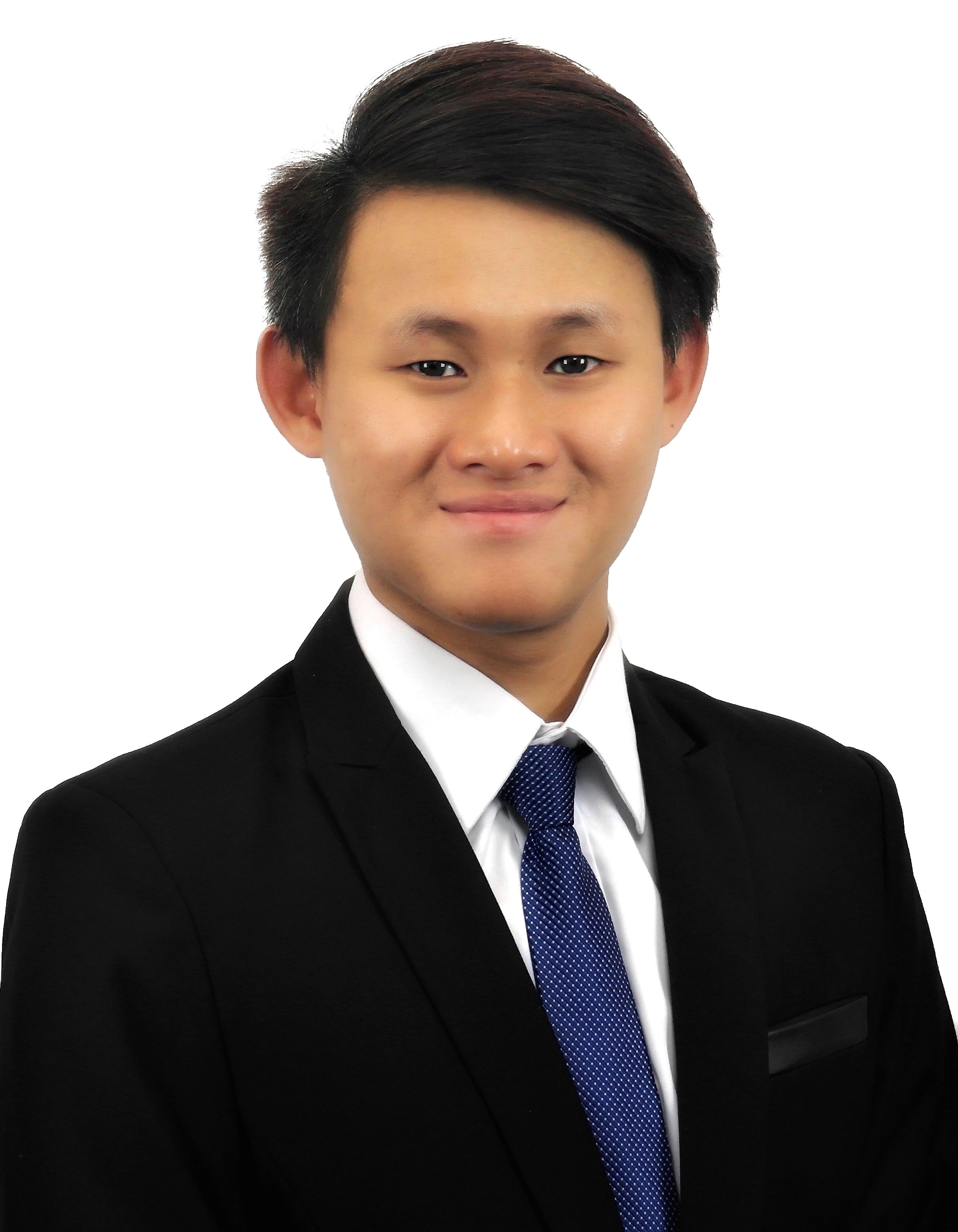