Learning about Seabird Response with SANCCOB

SANCCOB, a sea bird rescue and rehabilitation organisation in Southern Africa, has two facilities in South Africa and a third potentially on the cards for Namibia. The organisation is an active member of the Global Oiled Wildlife Response Services (GOWRS), and 100% reliant on donations for its survival.

The team, under the leadership of Dr Stephen van der Spuy, provide an essential service in this part of the world, particularly in its fight to save the critically endangered African Penguin which, at the current rate of decline will be fundamentally extinct as a species in the wild within the next 10 to 15 years.

Over the years, OSRL's South African team has assisted SANCCOB with the transporting of injured or sick sea birds from the west coast, where OSRL's SWIS base is located, to their seabird hospital in Cape Town.

Within the last two to three years, we are finding more and more sick and injured seabirds on the SWIS site. Catching these birds can be a comical affair, but also a worrying one, as our strict HSE protocols need to be taken into account. This led me to investigate ways on how we can do this better and more safely - as seabirds bite, seriously bite.

Fortunately for me, as I started putting thought to this idea, Paul Kelway, Wildlife Response and Preparedness Manager joined the business. Together, with support from Paul Foley, Response Manager, EMEA and Africa, we came up with thoughts for a training course.

I approached SANCCOB with our thoughts. SANCCOB warmly and enthusiastically embraced the idea, and appointed Romy Klusener their Rehabilitation Manager to draw up a training course.

Romy, with injections from Nicky Stander, drew up a two-day course for us, which concentrated on how to safely handle and transfer oiled, sick or injured seabirds from the area of capture to a rehabilitation centre.

Although the course was a two-day course, it was run over three days to allow for COVID-19 safety protocols.

Day One - covered all the theory and practical demonstrations in the classroom.

Day Two - the practical part of handling the birds safely

The course kicked off at 08h00 on the 05th Nov 2020, with myself, Lesley Roberts, Shamen Bunsee, Mustapha Issacs and Pieter van As reporting to the SANCCOB Cape town facility.

Following completion of all compulsory COVID-19 requirements, plus safety briefings including being shown the muster stations, we went into the lecture room where we were spaced 2.5 metres apart from one another, and so commenced day one.

Although a pain, face masks were compulsory for the entire duration of the course as was regular hand sanitisation.

In a nutshell we covered the following

We were also fortunate to watch the resident veterinarian and his team pin a broken wing of an Oyster Catcher for a few minutes. Fortunately, the operating theatre has a viewing window, which allows for spectators to watch proceedings without getting in the way or compromising the sterile environment of the theatre.

On Day Two, we arrived at SANCCOB and were issued with our "bird PPE" - which consisted of an oilskin and safety glasses. We used our own, gloves, rubber Crocs and rubber arm gauntlets. How I wished I had those in 2000 - I still have the mental scars of the MV Treasure oil spill of 2000, when human flesh from my arms and any other part of my body a penguin could get to was penguin food!

The day consisted of us helping the SANCCOB team, catch, weigh, feed and medicate the sea birds undergoing rehabilitation - we also helped prepare their food.

By the end of the day's session, we all had caught and handled Penguins, Kelp Gulls, Hartlaub Gulls and Swift Terns, which were the only sea birds in the rehabilitation pens. They did have a few others species like the Oyster Catcher, but these were still in hospital recovering from surgery.

I have to admit it was a fantastic experience, being taught how to catch and handle sea birds safely and correctly. I am already discussing the lessons learned and ideas for improvement to see how best we can roll this out across OSRL. This will give all our responders an insight into what wildlife rehabilitation experts need to have in place, should they attend to a spill where wildlife is heavily impacted.

What one of the largest animal rescue missions in history can tell us about wildlife response preparedness. 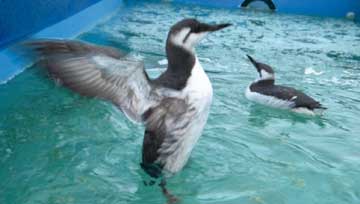