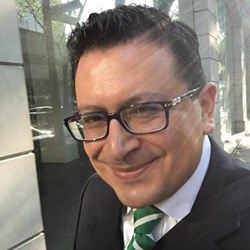 Ian Hernández has more than 20 years of international experience in different branches of the energy industry. His work includes different operational management, including the areas of investments and projects and assets in Exploration and Production, Distribution, Storage, and Refining.

In the preparation area, Ian led the development of regulatory compliance programs for more than 400 offshore and onshore assets and projects in 30 countries. In response to incidents, he has responded to more than 150 that include terminals and refineries to production platforms.

Ian's experience stands out as having been Director of Operations during the spill of the Deepwater Horizon platform in the Gulf of Mexico in 2010. During that period, he led strategies that included more than 5,000 people and vessels and aircraft in coordination with authorities in the Southeast region of the United States, including local, state, and federal governments.

Ian is a graduate of the Master of Business Administration from Rice University in Houston, Texas, and Wheaton College, in Wheaton, Illinois, in the United States, where he obtained a degree in Sociology and Chemistry.

Ian resides with his family in Houston, TX, USA.