Developing Leaders for a Crisis – Ego is the Enemy

Developing Leaders for a Crisis - Ego is the Enemy

In April 2010, when an explosion on the Deepwater Horizon platform triggered the world's largest accidental oil spill, all eyes turned to the Gulf of Mexico and the unfolding tragedy. In his quickly appointed role as National Incident Commander (NIC), United States Coast Guard Admiral Thad Allen was faced with an extraordinary task: deliver the US Government's response to this unprecedented and developing crisis.

With tens of thousands of people involved in the response efforts, Allen was placed into a chaotic and complex situation. He spearheaded countless teams, third-party organisations, and thousands of volunteers – all working to minimise the spill's social, economic, and environmental impact.

Simultaneously, Allen also had to:

Allen was no stranger to crisis management. He was involved in the US Government's response to Hurricane Katrina and the 9/11 terrorist attacks. However, it was clear that this crisis would be different in size and impact.

The spill had the potential to devastate people's livelihoods across the Gulf and significantly impact the local marine ecosystem. It also threatened to destroy global entities and damage a host of senior public officials, including then US President Barak Obama.

Under incredible pressure to deliver results, Allen would later comment on the challenge he faced in fostering a "unity of effort" amongst the relevant parties involved.

Every day, most of us find ourselves in situations ranging from simple, certain, stable, and clear to volatile, uncertain, complex, and ambiguous. The more adept leaders amongst us succeed because they can shift gears appropriately, absorb the increasing complexity, and convey a clear and straightforward plan.

The first challenge that most crisis leaders face is recognising the complexity of the situation they find themselves in. For this, we find that the Cynefin Framework, a Sense Making model developed by Dave Snowdon is beneficial.

A crisis is interesting as it is often multifaceted, requiring leaders and Crisis Management Teams to operate across all four domains simultaneously:

Whilst all these activities are often essential if a crisis is to be averted, the focus of this article is on the complex domain and how we can best equip leaders to deal with complexity in a crisis.

In our experience, three components enable leaders to perform well in a crisis (all domains):

Yet most corporate leadership development programmes seem to focus almost exclusively on skill development, whilst most crisis management training seems to focus on structure.

Although skill development is fundamental to leader development, we see this approach as flawed. It fails to encourage the individual leader to look deeper and examine the beliefs, which form the foundation of their behaviours, actions and decisions.

These beliefs and attitudes have a much more significant effect on behaviours, mainly when individuals are under pressure and are more likely to resort to habitual patterns of behaviour – behaviours that come naturally, whether they are 100% effective or not.

"In Over Our Heads"

To equip leaders to perform at their best in the complex domain of a crisis, we must first create the conditions for them to hone their skills outside of a crisis. For this, we draw heavily on the work of Robert Kegan, the Harvard psychologist.

Kegan contends that as we all move through life, we are transitioning between defined stages of development. These stages reflect our shifting perceptions of the world, and our understanding of our position within it – our 'identity' or 'ego'.

He states that development begins with the ‘Impulsive’ mind of early childhood, transitioning through the ‘Imperial’ mind of adolescence (when we focus on our own agenda) to the ‘Socialised’ mind of adulthood (where we develop empathy and are concerned with the ideas and societal beliefs of the people and systems around us).

Kegan and his fellow researchers have concluded that most functioning adults make it to the Socialised stage of development by the time they reach their late teens or early twenties and spend the rest of their lives in that mindset.

The socialised mind gives us everything we need to function as an effective member of society; however, it is insufficient for the challenge of leading in the complex domain of a crisis. For this, we need to transition to the fourth stage as a minimum.

Keegan calls the fourth stage the Self-Authoring mind, as it defines the stage where our self-worth is no longer intrinsically linked to other's views, or at least to the same degree.

It is the stage where we can create our own narrative within the confines of social norms and the point where we understand that we are independent of the expectations of our environment. At this stage, leaders can handle the complexity of thought and action that a crisis demands.

The fifth and final stage, according to Kegan, is the Self-Transforming mind. Here, we reach a state where we can inhabit multiple perspectives simultaneously and where we accept that our identity is continuously evolving – informed by the entirety of our experiences and the opinions of those around us, but not dependent upon them.

Interestingly, unlike the first three stages of development, both the Self-Authoring and Self-Transforming stages must be actively learnt – they don't happen automatically. As a result, it is predicted that only 30% of the general population will ever transition to the fourth stage in their development, and only five per cent will reach the fifth stage.

Consequently, many leaders still lack a genuinely independent sense of self and continue to seek the approval of others in terms of what they think, believe and feel. This seeking approval becomes an issue for those responsible for complex situations if they are firmly rooted in socialised beliefs and internal assumptions.

For leaders to thrive during even the most complex emergency responses, we must help facilitate the shift in perspective and understanding necessary to occupy the Self-Authoring and Self-Transforming stages of development. When a leader transitions into these stages, they can more reliably access the leadership competencies that will serve them well in a crisis.

The shift from the Socialised to the Self-Authoring form of mind requires deep contemplation and reflection over many months, if not years. This process is often referred to as ‘the Hero's Journey' because it requires us to examine and potentially dismantle some of our beliefs and internal assumptions.

This process takes immense courage and is probably why so few adults reach the Self-Authoring stage of development. Finding space for deep contemplation is perhaps more challenging now given the pace of life, hence why companies must put programmes in place to enable such contemplation and reflection. In our experience, structured group work and individual performance coaching are the most effective methods for enabling leaders to achieve this.

The Leadership Circle Profile - a Universal Model of Leadership

We use The Leadership Circle Profile (LCP) to augment this performance coaching conversation, which incorporates many different leadership and psychological theories.

It is most commonly deployed as a 360-degree profiling tool and assesses how those around them are experiencing a leader. The LCP is interesting because it shines a light on some of the beliefs and internal assumptions guiding a leader's behaviour.

It is important to note that the LCP is not a crisis leadership instrument – it is a 'business as usual' instrument. However, if leaders are to excel in a crisis, they must first hone the necessary beliefs and behaviours outside of a crisis when the pressure is typically less acute.

The Creative competencies measure key behaviours and internal assumptions that lead to high fulfilment, high achievement leadership. When leaders are 'creative', they are experienced by those around them as open and curious, empathic and present, authentic and purposeful. A 'growth' mindset prevails.

The reactive tendencies reflect inner beliefs that limit effectiveness, authentic expression, and empowering leadership. When leaders are 'reactive', they are experienced by those around them as closed and defensive, perhaps distant and insincere. A 'fixed' mindset prevails.

Reactive tendencies are to be expected because they are the product of a socialised form of mind. However, studies have shown that leaders who routinely demonstrate creative competencies are consistently viewed as more effective by those around them when compared to leaders that display reactive tendencies.

What's more, the teams that they lead are more successful when judged by nearly every conventional measure. Whilst these studies have been conducted in a non-crisis setting, we think that the lessons are equally applicable to a crisis situation. 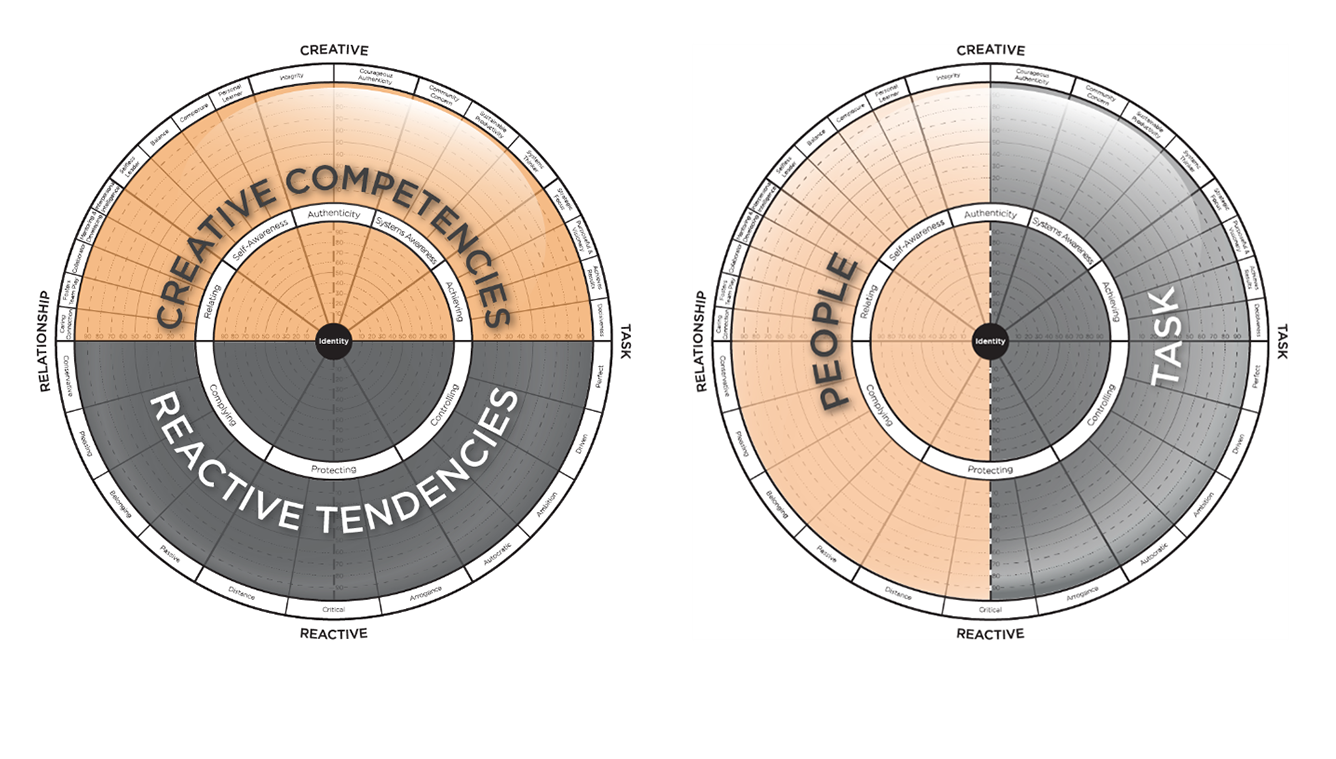 Humanity is grappling with the challenges of our time:

It is becoming increasingly clear that the Socialised mind is insufficient at enabling leaders to resolve these issues.

Operating with a Socialised mind, leaders cannot conceive – let alone implement – the kinds of solutions required. This mismatch between the demands of the situation and the individual's complexity of mind gives rise to a development gap (see graphic below). It is this gap that organisations need to target if leaders are to thrive in the complex domain. 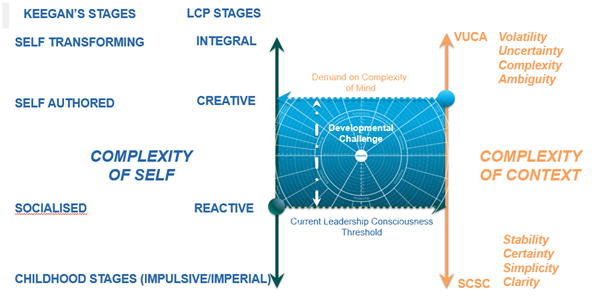 With a Socialised mind, the best a leader can do is try to simplify the context. We have seen this at work on the political stage in recent years with the spreading of ‘alternative facts’ and ‘fake news’, all an attempt to feed the leader’s ego and shape the narrative in the leader’s favour. More than ever, we need leaders who can thrive in complexity.

Dean joined OSRL in 2013 and is our Global Learning & Development Manager, overseeing all aspects of staff development. He specialises in leadership development and performance coaching and is particularly passionate about supporting lifelong learning. Dean is a former Army Officer and leadership instructor at the Royal Military Academy Sandhurst.

Andrew is a highly experienced and accredited leadership and performance coach. His role is to enable individuals and teams to pursue excellence and deliver business results. Andrew has over 15 years of professional experience within performance development and has worked in the military, education and industry.