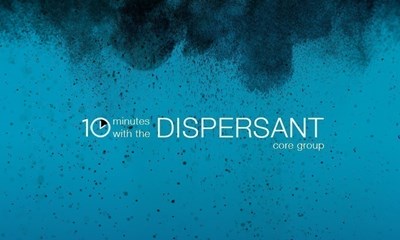 What is the Dispersant core group and why were you interested in joining?

The Dispersant core group is one of several Subject Matter Expertise Groups in Oil Spill Response Limited. The group consists of people in all of OSRL's three operating regions and from people working in a broad mix of our technical functions. Group members have varied levels of expertise.

Aaron Montgomery – Experienced contributor: I joined the core group as I am a self professed geek who enjoys the detail and getting technical. The dispersant core group provides the perfect platform for this. Why? Because there are many misconceptions surrounding how they work, their use and their effects on the environment. Thecommon  misconceptions surrounding dispersants provide the ideal platform to provide input and value to the oil spill community and further afield in addressing these misconceptions and providing greater clarity

Lucy Heathcote – Co-chair: From joining OSRL in 2006 and working in the response department I developed an interest in dispersants as a mitigation measure for the environmental impacts of oil spills. I really enjoy being involved in the core group as I believe that this is what makes OSRL special; it involves people from preparedness through to response and in all of our regions, meaning that we can really access and wrestle with the issues that affect our members relating to dispersant use.

How is the Dispersant core group working with industry and what external engagement has the group already undertaken?

The Dispersant Core Group has Dr Tom Coolbaugh as our industry sponsor. Dr Tom Coolbaugh is a Distinguished Scientific Associate at ExxonMobil Research and Engineering (EMRE) where he leads the Oil Spill Response Technology group.  His study focus areas include response technologies such as the use dispersants and in-situ burning, remote sensing of oil spills, and providing training to the international spill response community. He has been with ExxonMobil since 1988. Industry sponsors are industry-acknowledged OSPR experts who share knowledge, experience and industry perspectives with their Core Group.

Members of the dispersant core group have also been involved in various projects such as working with members to promote understanding of dispersant approval in Denmark, delivering workshops in New Zealand and Thailand as well as assisting ECRC to deliver a dispersant workshop in Canada, delivering presentations on the Global Dispersant Stockpile (GDS) in South Africa and preparing a short course and a number of papers for the forthcoming International Oil Spill Conference in May 2017.

Dispersant is a substance which breaks down oil into small droplets, increasing the speed at which natural dispersion will take place. These droplets then become suspended in the water column which allows the oil to be more readily available for biodegradation by microbes as they have an increased surface area to break down the slick.

As oil is exposed in the marine environment it becomes less amenable to dispersant as the oil weathers and exceeds its “window of opportunity”. It is most efficient to use dispersants whilst the oil is still fresh.

Dispersants are applied as a spray. For floating oil, this spray is applied from an aircraft or vessel.

For a continuous release of oil from a wellhead, this spray can be applied to the source by Remote Operated Vehicles using a system that pumps dispersant from the surface through specially designed wands, or directly into a capping stack.

What are the top 3 things do you think everyone should know about dispersants?

Dispersant use is a trade off and its use should be considered in both the planning and response phase. Dispersant use can be a critical component of an effective response to larger offshore oil spills. In particular, it is recognised that, when used appropriately, dispersants can greatly reduce the potential for long term environmental damage by preventing floating oil slicks from remaining on the sea surface and stranding on sensitive shorelines

2) Dispersants are only speeding up natural processes.

Natural dispersion will occur but maybe not quickly enough to prevent shoreline oiling or impacting other sensitive resources. The application of dispersant will remove oil from the surface of the water and reduce this threat.

Why are there 3 types of dispersant in the Global Dispersant Stockpile?

The GDS is made up of three different brands of dispersant, Finasol OSR 52, Nalco Corexit EC9500A and Dasic Slickgone NS. These three were selected as they are good “all-rounders” and the most globally approved which between them can cover the most regions and countries worldwide where dispersant use is allowed.

Why did OSRL develop the Tersus System for aerial dispersant application?

Under the Joint Industry Project a technical review paper was written reviewing the future of the Hercules platform. It was understood that the aging nature of the platform coupled with the increasing maintenance costs meant that a replacement had to be sourced. OSRL achieved this by developing the Tersus system. This is the first certified system to be brought into service,  OSRL now has two 727 aircraft and one Hercules in service to cover the requirement for wide area aerial dispersant application.