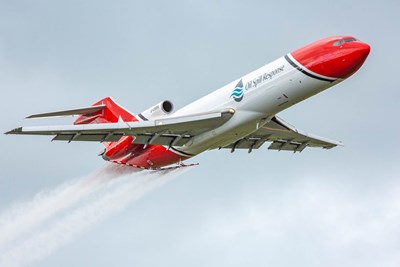 Joining OSRL as an Associate Member, the agreement aims to provide the MCA with additional resources that enhance its existing response capability in the event of a spill-related incident within British waters or along the UK’s coastline. More specifically, the agreement details the MCA’s requirement for access to OSRL’s fleet of aircraft equipped with dispersant delivery systems, as well as the provision of related training and exercises to maintain critical experience and knowledge.

“We’re delighted to welcome the MCA into the OSRL cooperative. Our Associate Membership is designed specifically for organisations that have a particular operational requirement. And, in the case of the MCA, it is our ability to rapidly deploy aviation resources to support dispersant application, and logistical support that was of particular interest.

“We currently maintain two Boeing 727s, operated in partnership with British aero-engineering firm 2Excel Aviation. Both are fitted with jet-based dispersant delivery systems and are capable of holding up to 15,000 litres of dispersant liquid.” commented Rob James, Regional Director for OSRL.

Arnie Palmer, Director of Special Missions at 2Excel Aviation, said: “We are thrilled to provide the large aircraft Tier 3 oil spill response capability to both OSRL and the MCA. Building the world-leading TERSUS jet-based spray system in line with OSRL’s vision of faster global response was both challenging and rewarding for 2Excel. The partnership between OSRL and the MCA is built on seven years of development and service; it’s a service 2Excel intends to deliver to both customers at the highest standard possible for many years to come.”

The MCA operates across the United Kingdom, preventing the loss of life along the country’s coast and at sea. It also has a stated commitment to ensure the ‘environmental safety of UK coast and waters’, reflecting the impetus for the new agreement with OSRL.

Claire Hughes, director of HM Coastguard, said: "The Maritime and Coastguard Agency takes its responsibility for the UK's precious coastlines and waters very seriously and will always look to review what resources we have available which led to the signing of this agreement."

“Our collaboration with the MCA is reflective of conversations we’re having across the maritime environment. As OSRL continues to innovate in terms of response capabilities and new technology adoption, a growing number of businesses and other institutions ­– that are increasingly focused outside the upstream sector – are looking to us for bespoke preparedness and response solutions.”

2Excel is an innovative aviation services business working across a range of industries including defence and security, engineering, events and disaster response. Activity is organised around two business lines: 2Excel Aviation, which comprises Capability Development, Special Missions and Charter; and 2Excel Engineering, which is a Maintenance, Repair and Overhaul organisation (MRO) for Boeing and Airbus narrow-bodied aircraft. Founded in 2005 by two Royal Air Force pilots, 2Excel has grown from five people and four aerobatic aircraft to more than 450 people and a fleet of 32. With an annual turnover of more than £45m, the rapid growth of the company’s business lines and capabilities has enabled 2Excel to become an emerging force in the market, successfully bidding for and winning contracts against much larger competitors. With bases at Sywell Aerodrome, Doncaster-Sheffield Airport and Lasham Airfield, 2Excel’s customers include Government departments, the defence and oil industries, airlines and airline charter brokers.