Exercise Shen & The Beast from the East 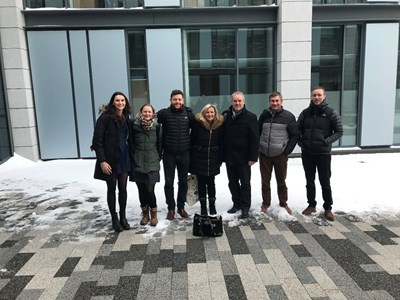 OSRL were invited to attend the UK National Exercise (Exercise Shen), which was held in Aberdeen and hosted by Nexen/CNOOC between 27th & 28th February 2018. As the scenario was an offshore incident, close to the Median Line, Nexen/CNOOC, Department for Business Energy and Industrial Strategy (BEIS), Maritime Coastguard Agency (MCA) & the Norwegian Coastguard were all involved and it was an opportunity for the Incident Management System (IMS) Core Group to become more familiar with how these government departments works with industry during a major incident. OSRL will be delivering IMS training to Nexen in the near future and by attending this exercise it has enabled us to see exactly where they are in relation to using an IMS, therefore we can use this experience to guide Nexen on how and where to improve their emergency response operation.
One of the key goals for the Core Groups is to develop our people, providing the chance to work with the different UK entities on a major incident was one such opportunity. Therefore, Tim Coombs, as the Co-chair, and Dennis Peach travelled up to Aberdeen to team up with Lucy, Gillian, Jamie, Dougal and Rosie (From Southampton) as support for Nexen.
The team were divided for the exercise with the majority working with Nexen's Environment Group, whilst Gillian and Tim were initially working in the MCA's Marine Response Centre (MRC).
Nexen had set up their Incident Management Team within their command centre, which included the incident commander, command staff and the various section heads from the general staff but the different functions were distributed throughout the office building. This may be an advantage when space is limited but must hamper communications, both formal and informal as well as the team ethic where the sections need to work closely together during planning and when preparing for the various meetings.
The main achievement that was added to the exercise was the application of the rainbow effect of IMS to the Gold Silver Bronze 'Rigid Structure'. This enabled the response to utilise both the operators' environmental unit and the MRC. It demonstrated that this works very well and the MRC/Industry shouldn't be so rigid in an IMS structure but should pull the best from each entity and almost make their own, whilst working within the boundaries of a typical Incident Management System (IMS). In reality, we need to be flexible in our approach to suit our clients (industry) and the government (in the country) we are working with.

This exercise emphasised the need for an initial Incident Action Plan (IAP), which is simplistic in its design but which contains sufficient detail for the operations teams to work to. This may be a simple 'one pager' that was delivered on the first day of Exercise Shen but which is built upon over the next operational periods – a good point to remember when we continue to deliver IMS training to clients. This was also very much appreciated by the MRC, as there was not an 'overwhelming' of information at the outset. One point that was made during the exercise de-brief was that there was a lack of high level meetings between each of the different groups i.e. Operational Control Unit(OCU), Marine Response Centre (MCU) Environmental Group (EG) and the Client's Incident Management Team. By having a system, such as IMS, it would enable this to take place and thus ensure key points, objectives and decisions are communicated to all key players.

A question that remains is: If industry continues to move towards an IMS structure and process how long will it be before governments do likewise. The UK already like the idea of a structured IAP and other governments are moving towards IMS (Operation Phakisa in South Africa), one day there may be a universal management system that can work for all (watch this space!!!!!).

The IMS Core group at OSRL can assist client in many ways, for clients that already have an IMS we can advise them on areas that need to be improved as well as offering them training in IMS and coaching and participation during exercises and incidents. For those clients that do not have an IMS structure, we can advise on the best approach and how to instigate a system together with advice, training and mentoring for their emergency response teams. We have advised several clients on setting up an Incident Command Centre and are helping in delivering training as well.

We as a group understand that in order to make an IMS work, the client and OSRL have to remain flexible in the way that IMS is used in order to gain the maximum from it and to achieve the objectives set.