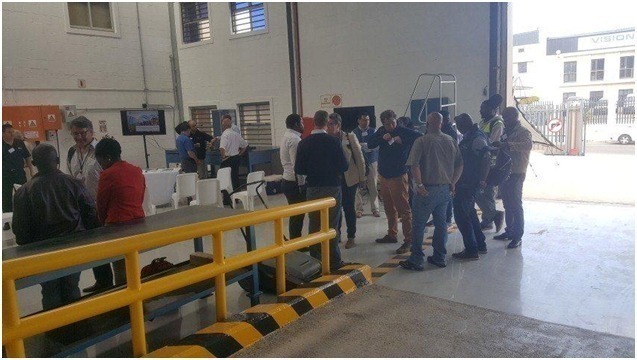 Back in October, the OSRL South African SWIS (Subsea Well Intervention Service) Team hosted our first ever Members’ day at the Global Dispersant Stockpile (GDS) base in Cape Town.

Mal Maclean, Projects and Secondments Manager, Dave Redington, GDS Lead, and Dave Oland, East Africa Representative, travelled to South Africa to assist in making the day an informative and memorable event. Dispersant, SWIS, Preparedness, SCAT (Shoreline Clean-up Assessment Technique), Training and Tier I Equipment Hire, were all on the agenda and along with the display of oil spill response equipment located in South Africa.

As I mentioned in my previous blog, 10th October, was the three year anniversary marking the official opening of the South Africa SWIS base, so it seemed fitting to start preparing the warehouse for another milestone event. With a marquee erected, the grass cut, tables, chairs, and large TV screens delivered, alongside a shipment of boom and skimmers for display, the preparations were ready.

The event was a resounding success, and the demonstration of our equipment was a highlight of the day in many ways, with many people being amazed at how a skimmer worked. I have already been approached by various locally based Members asking if we can host another Members’ day in 2017 in either Johannesburg or Durban...so watch this space!